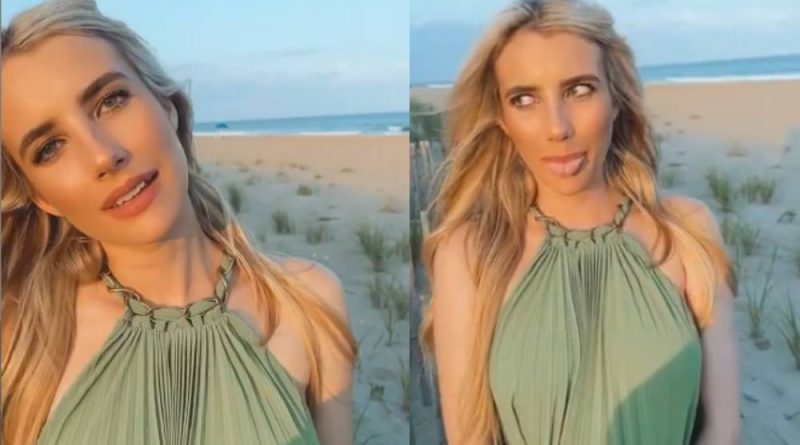 Emma Roberts poses on a beach for a video posted to her Instagram. The video has transformed into now-viral memes. (Instagram/@emmaroberts)

Emma Roberts did the right thing and thanked “gays and whoever else” for turning her into a hilarious viral meme.

The memes started shortly after Roberts posted a video to Instagram of herself on the beach over the weekend. It’s a simple video of the Scream Queens star smiling and posing for the camera while Lana Del Rey’s “Happiness is a Butterfly” plays in the background.

The video – which has been liked over 1.6 million times on Instagram – has the whole ‘candid but not really candid’ vibe. Famous friends from Madelaine Petsch to Naomi Watts and all Roberts’ fans simply commented on how gorgeous the American Horror Story alum looked.

Of course, it only took a short while for fans to give the video the meme treatment.

Me when I reply to the question “How was your weekend?” With a vague “it was super chill” to my coworkers after a genuinely concerning two day bender pic.twitter.com/eG7kJEUbgI

The movie detective’s dead wife in a home video: pic.twitter.com/jbte0FZaU1

me looking at myself on teams before everybody else logs into the meeting pic.twitter.com/o9AtdctUpw

marie antoinette when the people were begging for bread pic.twitter.com/0XeQMkIxV7

Emma Roberts bows down to the gays

Emma Roberts responded to fans Tuesday (27 July) through her Instagram Stories. She shared a section from her now-famous video, writing: “Me going viral after 30. Thank you gays and whoever else.”

Roberts recently appeared as a judge on an episode of Drag Race All Stars 6, in which the queens acted out a drag version of American Horror Story.

She told People that she was “so pregnant” when she filmed the episode, having given birth to her first child in December, and that she was “excited” to bring her unborn son  to the show.

“I was such a fan, and I was so excited when they asked me to be on it,” Roberts said.

She added that she “couldn’t even believe how talented” the queens were, saying it was “so fun to see it live”.

Fans have loved Roberts’ reaction to the memes with many revelling the fact that “gay Twitter” helped the actor go viral.

emma roberts knows her main audience at this point 😍pic.twitter.com/kq1m1iU4oz