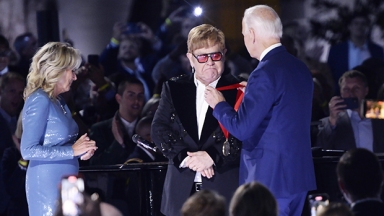 
It’s Elton John’s world and we’re just living in it! Following his epic collaborations with both pop princesses Dua Lipa and Britney Spears, the legendary British singer/songwriter, 75, was surprised with a National Humanities Medal by President Joe Biden at the White House on Friday night (September 23). Elton became teary eyed as the President and First Lady Jill Biden came up on stage to present him with the honor after his electrifying performance on the South Lawn.

“I’m never flabbergasted, but I’m flabbergasted and humbled and honored by this incredible award from the United States of America,” Elton said while overcome with emotion, per The Washington Post. “I will treasure this so much.”

The Grammy winner, who was invited to D.C. by the President to honor his global fight against HIV/AIDS, praised “America’s kindness to me as a musician,” calling it “second to none,” and vowed to continue his efforts to eradicate the disease.

“We’re joined by so many people that he’s set free to be themselves, to be treated with dignity and respect they deserve,” Biden said, per the outlet. “Families and advocates in the fight against HIV/AIDS. A fight that he has led with sheer will, a​​​ fight for those lives lost and those lives we can save. Leaders standing up for equality of all people, no matter who you are, or who you love.”

During the concert titled “A Night When Hope and History Rhyme,” which was part of Elton’s farewell tour after a 50-year career, the musician  performed a number of hit songs, including “Your Song,” “Tiny Dancer,” “Rocket Man,” “Crocodile Rock” and “I’m Still Standing.”

Elton’s last performance at the White House was way back in 1998, when he performed alongside Stevie Wonder at a state dinner for then-British Prime Minister Tony Blair hosted by former President Bill Clinton.