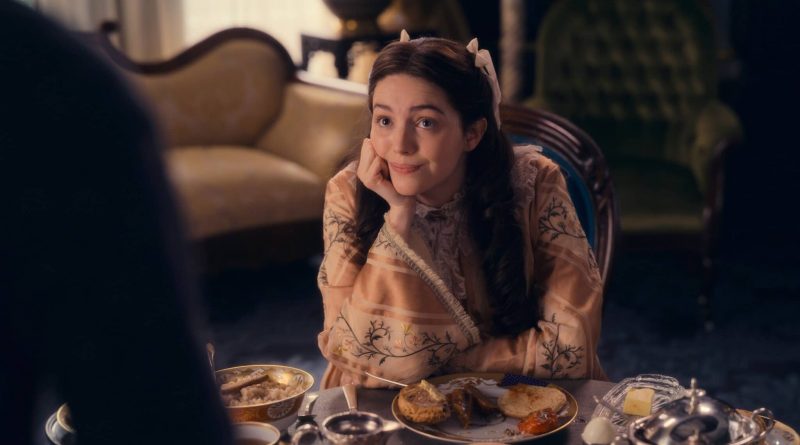 Dickinson star Ella Hunt says she and Hailee Steinfeld were only able to craft their beautiful on-screen relationship because they “deeply trust” each other in real life.

The English actress is just 23 years old, but she has firmly left her mark playing Sue, Emily Dickinson’s lover and and sister-in-law, in the Apple TV+ series. The show has won critical acclaim for its groundbreaking approach to one of America’s great poets – and it has also built an enormous LGBT+ following with its tender exploration of Emily’s queerness.

When they’re on screen together, Ella Hunt and Hailee Steinfeld are utterly absorbing and totally believable as a queer couple trying to navigate their love for each other. When asked how they crafted that dynamic, Hunt’s answer is very simple: it was all down to trust.

“We deeply trust each other at this point,” Hunt tells PinkNews. “When I come on set to shoot a scene, there’s nobody in the room I feel safer with or trust more than Hailee. It gives us the freedom to go as deep and as messy as we want. And we get to play, because we have that trust and we know our foundation, there’s so much room for us to explore.”

That was enhanced by the brilliant writing, Hunt says. Showrunner and creator Alena Smith wrote “these beautiful, long scenes” that allow Emily and Sue’s relationship to breathe and to take flight. At times, it felt almost like performing a play.

“It would just be the two of us in a room hashing out these scenes and discovering what they could mean for these characters. So yeah, our bond is really special, and it makes me really emotional thinking that we have finished our EmiSue journey,” she says, referring to the fan name for the characters’ relationship.

On an individual level, Hunt has delighted in watching her character mature as the years went by. She felt “a sense of ease and playfulness” playing Sue in the show’s “complex, beautiful and at times, very dark” final season.

“I think that partially came out of a deep love and trust for the team, we all know each other so well. I feel safe with them, and coming out of the pandemic and getting to shoot this third season, it just felt like a wonderful extra opportunity to go deeper with this character. I’m forever grateful to Alena for allowing me to take her as far as I got to take her.

“She’s been through so much, the growth from season one as a destitute young orphan to season two, suppressing the pain of a miscarriage with these elaborate parties and suppressing her love for Emily, to this season fully embracing her love for Emily, and watching how embracing that love colours all of the relationships in her life and all of the choices she makes. It’s a beautiful last season for her and I couldn’t have been happier to have done it.”

To say Dickinson has been a rollercoaster of a journey for Hunt would be an understatement. Before she was cast inthe series, Hunt had appeared on a number of television shows and had a few film credits. Winning the part of Sue thrust her into the spotlight in a new way. Looking back on her journey, Hunt is incredibly grateful for the experience.

“I think my overwhelming emotion is how grateful I am to Apple and to the producers of the show for allowing Alena to fully realise her creative vision for Dickinson. It wouldn’t do justice, it wouldn’t honour Emily Dickinson – this ahead of her time, iconoclastic poet – not to allow the creative team of Dickinson to fully realise their vision for the project. I couldn’t be happier to be part of a show that from start to finish has been executed to the exact vision of the creative team.

“This show has been incredibly formative for me in my life,” she continues. “When I started working on Dickinson, I had just turned 20 and moved to the city, and it has allowed me to explore both myself as a person and as a creative with such freedom and kindness. It’s such a kind team. I’m very emotional, but I couldn’t think of a better season to end on. It feels like the perfect ending of the show.”

Queer characters ‘should be at the heart of every story’, says Dickinson star Ella Hunt

Hunt’s role in Dickinson also helped her explore her own queerness, something she opened up about in a recent interview with SquareMile. That revelation was greeted warmly by Dickinson fans, many of whom had flocked to the show for its trailblazing approach to sexuality and love.

“It’s so special to me to be able to connect with people on that level and to be part of a show that allows people like us to feel seen, because we all deserve to, and we are in a day and age where we should be seeing queer characters at the heart of every story. It’s the world we live in,” she says.

“I am tremendously lucky to have been around a group of creatives who empowered me on my journey and who have allowed me to feel like it is a journey, and I don’t have all the answers yet. I am still evolving and changing and growing, and it’s beautiful to get to watch two characters on screen doing that as well. Emily and Sue are really carving out what it means for them to love each other this season, and I have tremendous admiration for them, and anyone who was queer in that time, because being queer by necessity meant being in the closet – a life of hiding. And how awesome is it that today we don’t have to hide?”

She continues: “I have tremendous admiration for them this season, and I don’t think Alena sugarcoats how difficult it is for them to find balance and happiness within this very complicated dynamic that they function in. One of Sue’s log lines of the season, her mantra is, ‘I just want to embrace the mess! I acknowledge that this is messy, but I just have to accept that mess is part of life’ – and it is for all of us. It is for me.”

It’s also refreshing to see Hunt, an openly queer woman, playing a queer character on screen. What are her thoughts on the ongoing debate around whether queer roles should be reserved for queer actors?

“It’s a really complicated conversation, and I don’t know if I have the answer to it honestly. I simultaneously feel like no actor walking into a casting should have their identity or sexuality presumed by a casting team, it’s something that would really upset me and I wouldn’t want to live in a world where that was a part of casting, to have one’s identity presumed, because I have evolved so much over this process. We all grow and change so much, especially in our youth.

“That said, I think there are particular roles, and Kristen Stewart has spoken really well on this… I do think that there are some characters that yeah, they do need a queer person playing a queer person. But at the same time, I just… I don’t have the answer.”

In a surprising turnabout, Hunt turns the question on me. “I don’t know, what are your thoughts on it? I’m always curious as to what people think,” she says.

I tell her that I agree it’s a complicated question and that I too can’t settle on a simple answer. I explain that I’ve seen so many queer roles played brilliantly by straight actors, but I’ve also seen queer actors bring an unnameable quality to their characters – something that a straight actor arguably couldn’t do. Ultimately, I tell Hunt that I think it varies from role to role. She seems to agree.

“Yeah, I think it has to be on a production to production basis,” she says. “It’s about finding the person for the role and Alena and the team obviously saw something in me that fitted Sue, and I don’t think I even knew that in myself at that point.”

As Dickinson prepares to bow out after three electrifying seasons, it seems obvious that the show will be remembered and watched for some time to come. Hunt thinks it’s “amazing” to think that people might return to Dickinson in the future.

“I hope that it continues to make people feel seen, to make people like us feel seen and less alone in the world,” she says. “It is a show that is about seeing and being seen, and accepting and embracing all of the sides of oneself. And so if it can keep making people feel like that, that’s a pretty awesome legacy.”

The first three episodes of Dickinson are available to stream on Apple TV+ now.