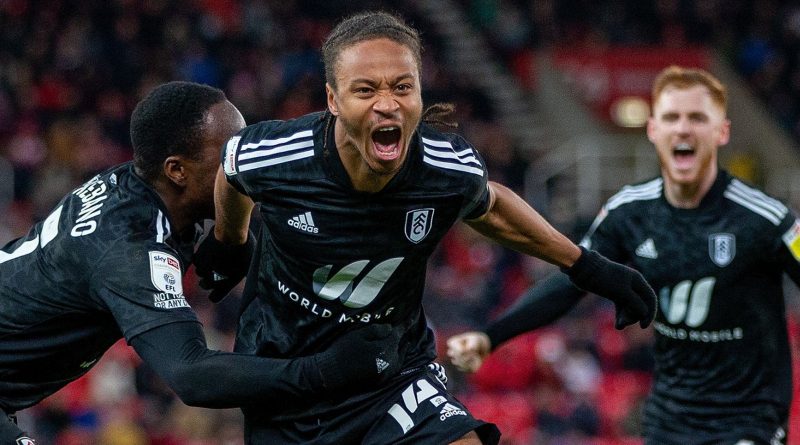 Fulham extended their lead at the top of the Sky Bet Championship with a thrilling 3-2 win at Stoke.

There was an explosive start inside two minutes, with Rodrigo Muniz cancelling out D’Margio Wright-Phillips’ first senior goal for Stoke.

Fabio Carvalho’s eighth goal of the season put Fulham ahead after 33 minutes.

Nearest challengers Bournemouth are eight points adrift of the Cottagers after a surprise 1-0 home defeat by Hull.

Ryan Longman curled home the winner 13 minutes from time to steer the Tigers away from relegation danger.

Andre Gray’s early opener was cancelled out by Jordan Shipley just after the break before Adomah made it four consecutive league wins for the Hoops.

West Brom stay fifth as their late show accounted for Peterborough 3-0 at The Hawthorns.

Cedric Kipre, with his first Albion goal, Karlan Grant and Grady Diangana saw off Posh with goals in the final 12 minutes.

Danny Ward scored a hat-trick as Huddersfield won 4-3 at Reading.

Six goals came in an action-packed first half, with Lucas Joao’s early opener for the Royals wiped out by goals from Danel Sinani and Ward.

George Puscas equalised before Ward restored Huddersfield’s lead after 25 minutes with his second.

Michael Morrison levelled on the stroke of half-time, but Ward won it for the Terriers eight minutes into the second period.

Second-half goals from Lewis Grabban and Brennan Johnson put Forest 2-0 ahead before a dramatic finale at the City Ground.

Tom Lawrence netted from the penalty spot in the 87th minute to reduce the deficit and Derby substitute Ravel Morrison was then sent off in stoppage time for a high challenge on Philip Zinckernagel.

Chris Martin scored twice as Bristol City came from behind to beat Cardiff 3-2 in an eventful Severnside derby.

Martin and Weimann gave the hosts a two-goal cushion before Max Watters grabbed a last-minute consolation for Cardiff.

Birmingham claimed a first win since the end of November with a 2-1 home victory over Barnsley.

Loan signing Onel Hernandez and Scott Hogan scored either side of the break before Victor Adeboyejo pulled one back for the Tykes.

Rhian Brewster and Jack Robinson were on target in the space of three minutes just after half-time and Luton’s misery was completed by the dismissal of Reece Burke for a professional foul.

Wigan moved top of Sky Bet League One with a 3-2 win over Gillingham as Wycombe suffered an unexpected defeat at relegation battlers Morecambe.

Will Keane headed the Latics into an eighth-minute lead, with Stephen Humphrys (21) soon adding another.

However, Gills substitute Ben Reeves (53) reduced the deficit soon after the restart and Stuart O’Keefe’s drive levelled things up with 20 minutes left.

Wigan, though, won it when Keane tapped in from a corner 13 minutes from the end.

The Latics are ahead of Sunderland – who beat Portsmouth 1-0 – on goal difference, but have four matches in hand, while the struggling Gills slump to the bottom after a third straight defeat.

Adebayo Akinfenwa had got Wycombe off to a flying start at Morecombe when he headed them in front after only 90 seconds.

However, Morecambe defender Anthony O’Connor nodded in from a corner to equalise six minutes before half-time.

Jack Grimmer (54) put Wycombe back ahead again early in the second half, only for the Shrimps to fight back again and level things up on the hour through Jonah Ayunga.

Morecambe turned the game around in the 67th minute when top scorer Cole Stockton raced onto a ball over the top to volley past the goalkeeper.

Wycombe slip to fourth after Rotherham beat Cheltenham 1-0 with a first-half goal from Michael Smith.

Elliot Embleton’s strike shortly before the break proved enough for Sunderland to see off Pompey at the Stadium of Light, and they sit a point ahead of the Millers.

Doncaster hauled themselves off the bottom after pulling off an unlikely 1-0 win at play-off hopefuls MK Dons with a 41st-minute goal from Joe Dodoo.

Max Melbourne struck in stoppage time to give Lincoln a 2-1 win at Plymouth. The Pilgrims had led through Luke Jephcott (33), but Imps forward John Marquis equalised five minutes into the second half, before defender Melbourne headed in from a corner.

Crewe remain in trouble after a 1-0 defeat at Cambridge, where midfielder Adam May made the decisive breakthrough shortly before half-time.

Burton fought back to draw 1-1 at home against AFC Wimbledon.

Ollie Palmer broke the deadlock to give the Dons the lead with 20 minutes left, only for Daniel Jebbison (77) to soon have Albion level.

The Owls took an early lead through midfielder Barry Bannan in the seventh minute, but Oxford were level when Matt Taylor headed in on the stroke of half-time.

Josh Windass struck on the hour to restore Wednesday’s lead, only for Oxford to immediately equalise straight from the kick off when Taylor bundled the ball in.

With just six minutes left, substitute Winnall nodded in from a corner to ensure all three points for the home side.

Dion Charles struck with a minute left to give Bolton a 1-0 win at Shrewsbury, while Charlton beat Fleetwood 2-0 at The Valley.

Mason Burstow (53) headed the Addicks in front early in the second half following a free-kick, with midfielder Albie Morgan adding a second during stoppage time.

Ipswich came from behind to beat Accrington Stanley 2-1 at Portman Road.

Ipswich took the lead again in the 65th minute through a fierce drive from Conor Chaplin.

Matty Stevens and Jamille Matt were on target once again as Forest Green stayed seven points clear at the top of Sky Bet League Two following a 3-0 win at home to Carlisle.

Rovers took the lead in the 16th minute when Nicky Cadden’s cross was turned into his own net by Morgan Feeney.

Stevens doubled their advantage seven minutes into the second half and Matt made the game safe as the strike-pair made it 16 league goals apiece for the campaign.

Second-placed Tranmere needed a deflected free-kick from Jay Spearing to take maximum points in a 1-0 victory at Crawley.

Northampton moved up to fourth following a goalless draw against third-placed Sutton at Gander Green Lane.

The home side were reduced to 10 men in the 74th minute when Craig Eastmond was sent off.

In-form Mansfield made it seven straight wins with a 3-1 victory at Barrow.

The Stags got off to the perfect start as Rhys Oates flicked in a header from a first-minute corner, but Barrow levelled in the 17th minute when James Jones powered home from a Robbie Gotts centre.

Stephen McLaughlin put the Stags back in front with a low drive in the 25th minute, only for Nigel Clough’s side to lose Farrend Rawson to a second yellow card before the break.

But Mansfield scored again in the 68th minute when Jordan Bowery headed in a free-kick to seal the points.

Sam Finley scored a fortuitous equaliser to earn Bristol Rovers a 1-1 draw at Swindon in the early game.

Tyreece Simpson put the Robins in front with a curling strike from outside the box in the 16th minute – his 11th goal of the season.

Rovers equalised before half-time as Finley’s cross nestled in the back of the net despite Aaron Collins claiming to have got the final touch.

Exeter claimed a 2-0 win at Walsall as Timothee Dieng’s thumping header at the end of the first half put them in front and Cheick Diabate sealed the points late on after the Saddlers had Rollin Menayese sent off for a second booking.

Jack Muldoon scored a hat-trick as Harrogate eased to a 3-0 win over Oldham, while Wayne Brown’s spell in caretaker charge of Colchester got off to a flying start as they claimed a 3-0 win at Salford.

The U’s took the lead after 31 minutes when Alan Judge whipped in a cross for Luke Chambers to loop a header over the goalkeeper and it was two shortly afterwards when Ipswich loanee Myles Kenlock tapped in a debut goal. Corie Andrews wrapped up a first victory since November eight minutes from time.

Nicky Featherstone rescued Hartlepool a point in a 1-1 draw at home to Stevenage after Luke Norris had opened the scoring from the penalty spot, while Courtney Baker-Richardson’s header was enough for Newport to snatch a 1-0 win at Scunthorpe.