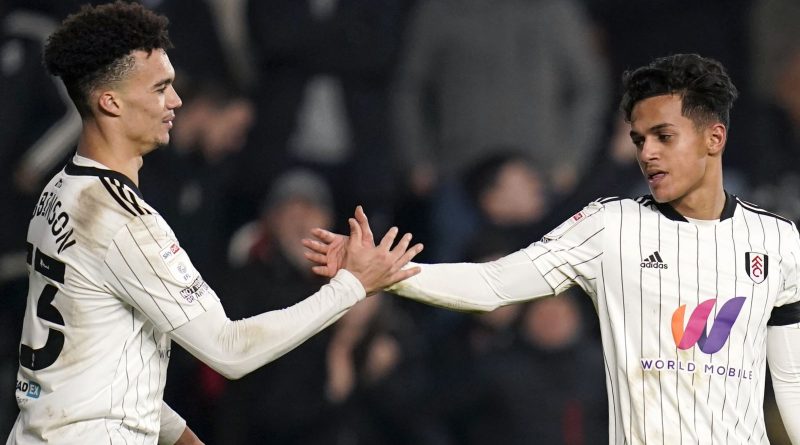 Fulham scored six goals for the third Championship game in succession as they strolled to a convincing 6-2 win over Birmingham at Craven Cottage on Tuesday.

Marco Silva’s men – who beat Reading 7-0 on January 11 and Bristol City 6-2 four days later – took the lead after 10 minutes when Marc Roberts turned Harry Wilson’s cross into his own net.

And after 43 minutes it was 4-0, as Neeskens Kebano, Fabio Carvalho and Tom Cairney struck for the rampaging Cottagers, but Ivan Sunjic struck a stunner before the break to give the travelling Blues fans something to shout about at the break.

A controlled finish from Gary Gardner gave the visitors further hope of comeback after half time in west London, though that was extinguished when Carvalho added his second within 60 seconds.

Meanwhile, in the evening’s other second tier fixture, Preston fought back from a two goals down to hold Sheffield United to a 2-2 draw.

Jayden Bogle’s 17th minute strike gave the Blades the lead at Deepdale, before Andrew Hughes gave away a penalty and was given a red card for his troubles, with Billy Sharp converting from the spot.

But Ryan Lowe’s men rallied after the break and halved the deficit through Alan Browne with 19 minutes to play, before Emil Riis completed the comeback in the final minute of the 90 to continue Lowe’s unbeaten start

Wigan moved up to second in Sky Bet League One with a hard-fought 2-1 win at Morecambe.

Stephen Humphrys headed home with 17 minutes left to earn the Latics a fifth consecutive victory in all competitions but it could have been very different in Lancashire.

Cole Stockton had put Morecambe ahead after only seven minutes with his 19th effort of the campaign.

Visiting Wigan looked set to trail at the break but Will Keane levelled on the stroke of half-time.

And Humphrys header saw Leam Richardson’s men leapfrog Rotherham and Sunderland to move within a point of leaders Wycombe, who have played four more games than their nearest rivals.

Wimbledon edged a further point clear of the relegation zone with a goalless draw at home to play-off chasing Portsmouth.

Danny Cowley’s Pompey went closest to opening the scoring with quarter of an hour left but Mahlon Romeo’s long-range strike hit the crossbar to ensure it finished 0-0.

Hosts Wimbledon stayed 20th but are now three points ahead of Morecambe while Portsmouth remain in ninth spot.

Cambridge made it four wins in a row with a 3-1 triumph over basement club Doncaster.

Harvey Knibbs broke the deadlock in first-half stoppage time for the U’s with a neat finish.

Harrison Dunk headed home a second at the back post after 62 minutes but Rovers set up a grand finale when Joe Dodoo tapped in from close range.

Mark Bonner’s men wrapped up the points late on through Sam Smith to move up to 13th with Doncaster rooted to the bottom and 11 points from safety.

The fourth scheduled fixture in League One on Tuesday between Rotherham and Lincoln at the New York Stadium was postponed around six hours before kick-off due to a frozen pitch.

Forest Green’s bid to extend their lead at the top of Sky Bet League Two was thwarted after Tuesday night’s match against Mansfield was abandoned because of heavy fog at The Fully Charged New Lawn.

Following an initial delayed kick-off until 8pm, the game was stopped after only four minutes.

The officials waited to see if conditions improved, with the players having been sent back to the dressing rooms, before the match was eventually abandoned at 0-0 shortly before 8.30pm.

Rovers remain seven points clear of Tranmere and still have a game in hand.

Sutton climbed to third after a stoppage-time goal from midfielder Will Randall saw them come from behind to beat strugglers Colchester 3-2 at Gander Green Lane.

On-loan Bristol City midfielder Owura Edwards – recalled from a spell at Exeter to then head straight back out with the U’s – gave the visitors an unexpected early lead inside three minutes.

Sutton, though, were soon level when Isaac Olaofe followed up on a rebound after Omar Bugiel’s effort hit a post.

Colchester, on the back of a four-match losing run in the league, went ahead again just before half-time when Freddie Sears converted from the penalty spot following a handball.

Sutton – unbeaten in their previous four league games – hauled themselves level in the 64th minute when Olaofe nodded home after a header back across from substitute Richie Bennett.

Then, just when it looked like both sides would be taking a point, midfielder Randall struck in added time.

Salford won 1-0 at Port Vale, where a tractor was sent on to help fix a dislodged goalpost during the first half.

There was a stoppage on the half-hour mark after Vale defender Connor Hall and Salford striker Tom Elliott had clattered into the woodwork, which caused damage to the goal.

Eventually the Vale Park ground staff brought a tractor onto the pitch to help rectify the issue and play was able to resume, with 10 minutes added at the end of the first half.

Salford went in front shortly after the restart when Elliott stabbed the ball in at the near post after a corner was not cleared.

Stevenage put some distance between themselves and the relegation zone with a 2-1 home win over Crawley.

Jake Taylor’s close-range header gave them the lead in the 29th minute.

Crawley were level on the stroke of half-time when Tom Nichols curled the ball into the top corner.

With 18 minutes left, Taylor turned provider as his cross was tapped in by Luke Norris from close range.

Carlisle and Hartlepool played out a goalless draw at Brunton Park.

Blues midfielder Brennan Dickenson rattled the crossbar with a free-kick early in the second half.

At the other end, Pools full-back David Ferguson saw his shot hit the goalkeeper and fly up onto the woodwork.