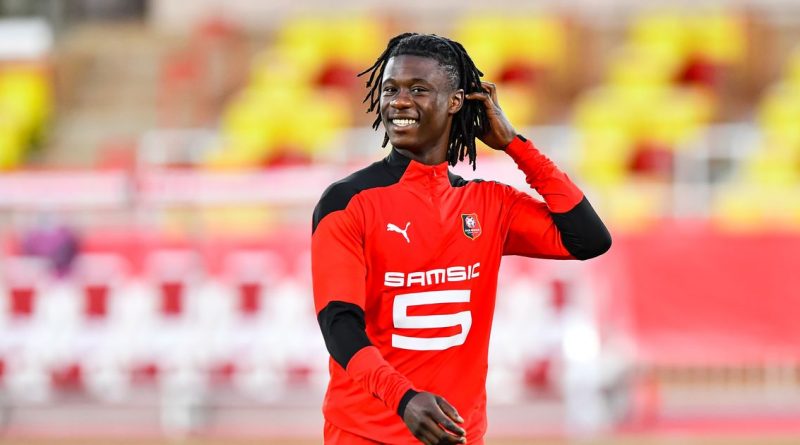 The feasibility of Manchester United’s planned move for Rennes midfielder Eduardo Camavinga is becoming more realistic with every day that passes.

The 18-year-old playmaker is a hot talent and has attracted interest from across Europe after a stellar season with the Ligue 1 outfit last year.

Camavinga is a product of the Rennes youth system and helped the club to a sixth-place 2020/21 finish.

Now the Manchester Evening News report that United could be in pole position to land the young talent.

However, United hit the reset button on their transfer ‘culture’ two years ago in a bid to once again mount a serious challenge on the Premier League title.

Since then United have prioritised the signing of players within a preferred age range of 23-28.

Acquisitions such as Aaron Wan-Bissaka, Bruno Fernandes, Donny van de Beek and Alex Telles have all met that criteria with 28-year-old Raphael Varane joining that list this summer.

It’s not an inflexible strategy at Old Trafford, as proved by the arrival of the ageing but experienced Edinson Cavani last summer – a move that proved to be a shrewd piece of business.

Despite his now 34 years of age, the Uruguayan popped up with key goals for The Red Devils last year, eventually replacing Anthony Martial as the side’s first-choice striker.

Would Eduardo Camavinga be a good signing for Manchester United? Let us know in the comments below.

The big buck signing of Jadon Sancho this summer, just 21 years old, is also out of that supposed age range but the winger has more than proven his ability at the highest level.

The former Borussia Dortmund man has 38 Bundesliga goals to his name since 2017 and showed flashes of brilliance for England at the Euros, despite missing that crucial penalty in the final.

Ed Woodward spoke of the club’s new transfer culture in his resignation letter earlier this year.

He wrote: “I am proud of the regeneration of the club’s culture and our return to the Manchester United way of playing.

“We have invested more than £1bn in the squad during my time here and I am particularly delighted with the progress the players have made under the astute leadership of Ole Gunnar Solskjaer and his coaching team in the last two years.

“I am sure that with the changes we have made on-field and to the coaching and football staff in recent years this great club will soon be lifting silverware again. It deserves to.”

At just 18 years old, Rennes’ Camavinga would be United’s youngest acquisition since adopting that new culture.

However, that’s not the only reason the midfielder doesn’t meet the new United transfer plan.

Given Solskjaer’s need for players to be passionate about joining the club, it puts question marks over Camavinga’s move.

It’s been widely reported this summer that the youngster has his ‘heart set’ on a move to Spain with giants Real Madrid and Barcelona set to be interested.

Whether the United boss can overlook that remains to be seen.