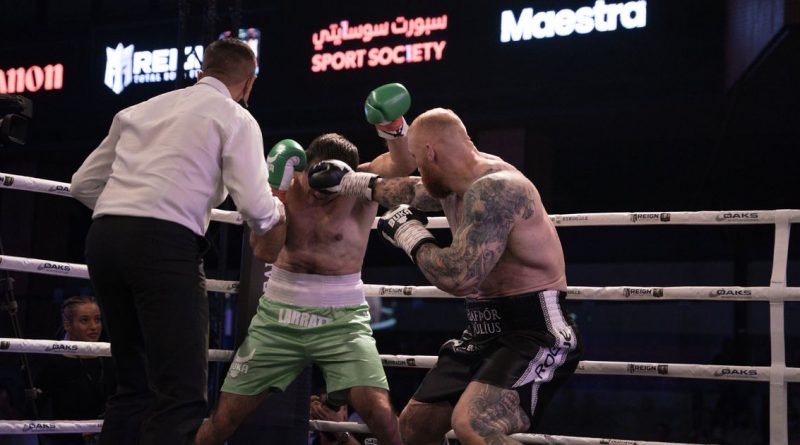 
The strongman rivals were set to fight over the weekend, but Bjornsson had to take a last minute fight with Larratt instead after the Brit tore his bicep in training

Eddie Hall has ‘congratulated’ his rival Thor Bjornsson for his win over Devon Larratt on Saturday night.

Bjornsson stopped Larratt in the first round of what was a comical mismatch at the Dubai Sports Society on Saturday, and is set to now fight Hall next year.

The pair were supposed to square off last weekend but Hall tore his bicep in training, with Larratt stepping in at short notice.

After after watching Bjornsson handily put away the legendary arm wrestling champion, Hall jokingly posted to Facebook, telling Thor he had simply beaten an “old man”.

“Well done to Thor for beating an old man up with five weeks training,” Hall said under a post announcing the result of the bout. “Outstanding!”

Thor Bjornsson stopped Devon Larratt inside of one round
(

And in a later Instagram post, Hall put “jokes aside” to express his respect for Larratt, who took on a mammoth challenge in the four-stone bigger fighter who had been training for the better part of two years.

After the fight, Bjornsson made it clear that he was only targetting Hall next, telling fans to expect another knockout in that omn.

“You guys know who I want to fight, come on who is it?,” Bjornsson said in his post-fight interview.

“I know he is at home chilling on the sofa with his popcorn and cola, enjoy your life buddy I am gonna knock you out soon.

“I just appreciate the opportunity so much, thanks so much you guys are amazing, I love competing and I have huge respect for this sport.

“It is the hardest sport I have tried but I loved it.”

‘The Mountain’ was simply too powerful for his arm-wrestling champion opponent on the night, with the referee seeing no option but to call off the contest after sustained pressure from the Icelandic fighter.

Did Thor Bjornsson impress you on Saturday night? Let us know in the comments section!

Larratt had admitted to Mirror Fighting ahead of he fight that his boxing was “terrible”.

And he lived up to that promise in the opening stages of the first of six scheduled rounds, although he did at times seem to catch the massive 6’9′ fighter

“Devon is such a warrior, he has the biggest heart,” Bjornsson added post-fight.

“I know that guy is something else, taking the fight on five weeks notice is brave but coming here is mind-blowing.”

Bjornsson and Larratt headlined a card made up of a mixture of professional fights and bouts between cross-fit athletes and powerlifters.

Hall and Bjornsson will likely fight in 2022, with Dubai or a United States venue the most likely for the event.