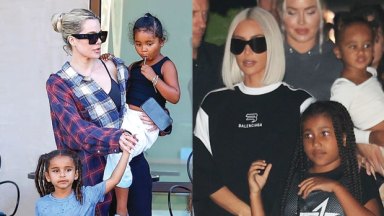 
The Kardashian cousins got each other’s backs! Rob Kardashian’s baby girl Dream, 5, and Khloe Kardashian’s daughter True, 4, came together to support Kim Kardashian’s eldest North, 9, at her basketball in Los Angeles on Saturday, July 23. In a photo posted by family friend Natalie Halcro, whose 2-year-old daughter Dove was seated between Dream and True, the adorable tot squad — joined by Kim’s daughter Chicago — cheered on their cousin from the bleachers. Kim and Khloe sat behind the kids, posing for their lives with peace signs and puckered lips.

The bond is clearly strong in the reality show dynasty as the Kardashian siblings have been making sure their offspring show up to family events recently. For Khloe’s birthday earlier this month, True and Dream joined Rob on Kylie Jenner’s private jet to kick off the celebrations. In a rare appearance, Rob can be seen in a video posted by Khloe relaxing in his seat while the two adorable cousins jump for joy in front of him and play with the balloons that are decorating every inch of the jet’s interior.

While Rob may be a bit camera-shy, it sounds like Dream is ready for her close-up.  The daughter of Rob and Blac Chyna recently shot a commercial with her grandmother Kris Jenner for Amazon Glow, where she “impressed” everyone on set, causing Rob to gush over the ingenue, according to a source who EXCLUSIVELY gave HollywoodLife all the details.

“Dream had so much fun shooting the commercial with Kris, she’s already asking when the next one is,” the insider dished. “Rob‘s never going to be a stage dad but he’s so proud of her. Everyone at the shoot was raving about what a natural Dream is and how great she is to work with, she totally impressed everyone.”

As for how Dream’s close-up came to be, a second source EXCLUSIVELY told HollywoodLife that it was all the famous momager’s idea! “Kris was the one who was initially approached by Amazon for this new partnership. When she learned what the ad was all about, she immediately knew Dream would be perfect for this.”