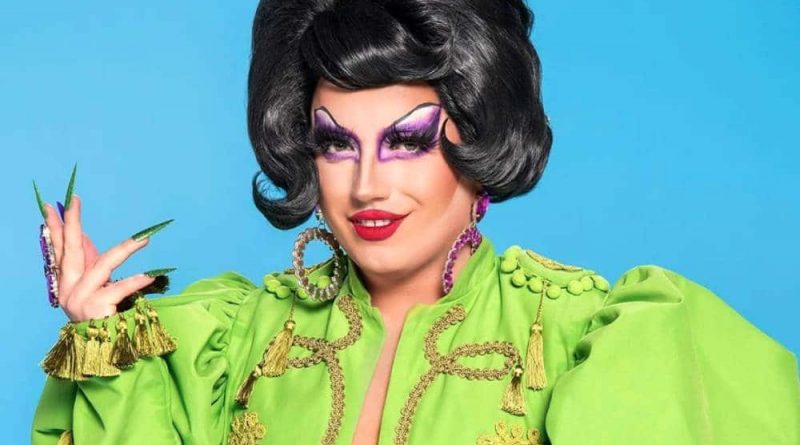 Drag Race UK series three contestant Choriza May slammed xenophobic trolls who have told her that she should compete on the Spanish version of the Drag Race franchise. (BBC Three)

Drag Race UK’s Choriza May has denounced trolls who say she should compete in the Spanish series instead of the British one.

The Newcastle-based queen is one of the 12 gag-worthy queens competing for the title of the UK’s next drag superstar in Drag Race UK season three.

Choriza – who is originally from Valencia, Spain – has tirelessly worked her way up the ranks of the North East’s drag scene, even performing on the main stage at Northern Pride 2019.

Even with her record of drag excellence in the UK, Choriza shared that she has been subjected to xenophobic hate online.

In a series of blistering posts on Twitter, she alluded to people (wrongly) suggesting that she should have participated in Drag Race España rather than the British franchise – when she lives in England and holds UK citizenship.

“This whole ‘Choriza should be doing Drag Race España not UK’ that some of you have been saying, really feels like the gay version of ‘Go back to your country’,” Choriza wrote.

“I decided to do [Drag Race UK] BECAUSE I AM A UK CITIZEN AND I’VE BEEN LIVING HERE FOR ALMOST 6 YEARS.”

This whole “Choriza should be doing Drag Race España not UK” that some of you have been saying, really feels like the gay version of “Go back to your country”. I decided to do DRUK, BECAUSE I AM A UK CITIZEN AND I’VE BEEN LIVING HERE FOR ALMOST 6 YEARS.

She also condemned “inappropriate” comments that she doesn’t “represent Newcastle drag” or that more broadly bash immigrants living in the UK.

“I get sometimes this comment might come without malice and Drag Race España was fierce!” Choriza said. “But it is very inappropriate and I’ve already have had to hear things like ‘she does not represent Newcastle Drag’, so just stop it porfavor.”

She continued: “The UK has over 3 million EU immigrants.

“We are lawyers, designers, bartenders, aupairs and guess what, ALSO DRAG PERFORMERS.

“So get used to seeing us on shows like this. It’s only taken 3 seasons for one of many of us talented b*****s to make it. So shush perras!”

Fans came out in droves to support Choriza May’s participation in Drag Race UK, lambasting anyone who dared dictate who can participate in the show.

i’ll never understand why people who literally don’t do drag have such strong opinions on what drag is allowed in what space. Crystal was literally from Canada but you didnt hear these white twinks say anything. Also citizenship and birth certificates are a social contract

i’m so sorry that you’ve had that kind of message. DRUK should represent the diversity of the uk, & i think it’s sad when people choose to be limited in terms of the talent that they could enjoy because of some nebulous idea about what nationality looks like. i’m glad you’re on!

You belong on UK RPDR too. You’re part of the heart and soul of Newcastle’s drag & LGBTQIA+ scene – which will only expand as more people will fall in love with you. We’re proud as heck! You’ll do the UK proud, especially the North East.

Sorry about the ignorance babe, I’ve lived here for 24 years and still get called a “foreigner.” You’ll never convince the bigots so you might as well be fabulous!

If you treat queens like this you have no place in any queer venues. You don’t get to decide who lives where or who can compete in a TV show. Choriza is incredible and deserves everything https://t.co/l84bB1JkZl

I for one am very happy to see a fellow European immigrant on DRUK 🥰 You rock Choriza! https://t.co/9nKEOXyIlT