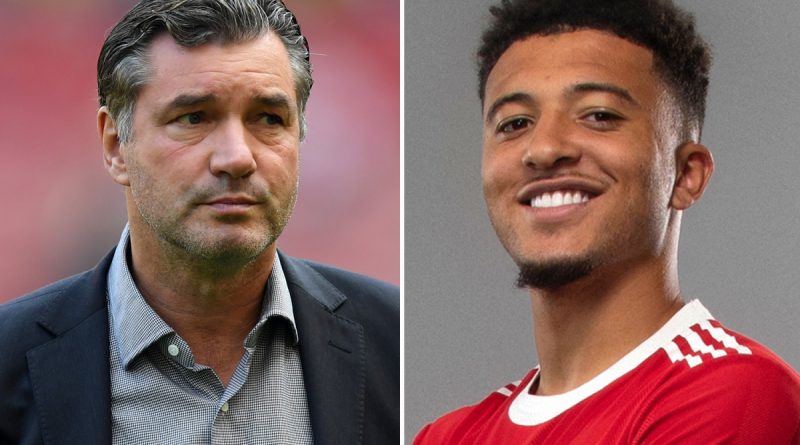 The England winger, 21, finally completed his £73million move to Old Trafford on Friday.

Sancho had been hotly-linked with a move to United for well over a year, with a move in 2020 failing to materialise.

But after eventually putting pen to paper on a deal to head home to England, Dortmund thanked the Three Lions ace for his professionalism.

On Sancho’s move, CEO Hans-Joachim Watzke told the Dortmund website: “It was Jadon’s express desire to return to his home country and the Premier League.

“His behaviour was absolutely flawless at all times.

“I would therefore like to thank him on behalf of everyone at BVB.”

Sporting director Michael Zorc added: “In his four years with us, Jadon has developed greatly.

“Towards the end of last season in particular, he contributed to the team’s success with important goals and assists.

“We would like to thank him for his commitment and wish him the best for his future career.”

Sancho himself thanks Dortmund for helping him develop from relatively unknown teenager to superstar winger.

The England ace said: “I can’t thank the people in charge at Borussia Dortmund enough for the chance they gave me as a very young player.

“At BVB I was able to mature into the player I am today.

“The DFB Cup win last season was a great end to my time at BVB.

“But I will always remember the support and love of the incredible fans as something special.”

On moving to United, Sancho added: “I always knew that I would return to England one day.

“The chance to join Manchester United is a dream come true and I just cannot wait to perform in the Premier League.

“This is a young and exciting squad and I know, together, we can develop into something special to bring the success that the fans deserve.

“I am looking forward to working with the manager and his coaching team to further develop my game.”