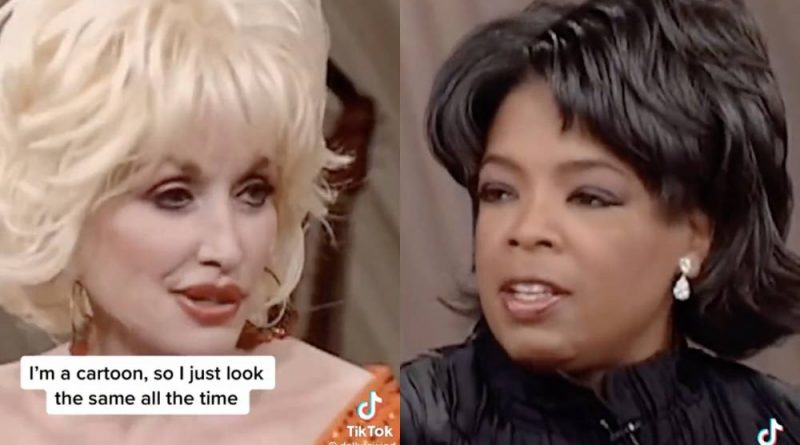 Dolly Parton has been widely praised on social media for artfully handling some ’embarrassing’ plastic surgery questions in a 2003 interview with Oprah Winfrey. (TikTok/@dollyrewind

A resurfaced video of Dolly Parton artfully dodging plastic surgery questions has sparked a heated debate about if Oprah Winfrey was trying to “embarrass” the music icon.

A Dolly fan account – known as @dollyrewind on TikTok – originally uncovered a nearly 18-year-old clip of the “Jolene” singer answering a question from Oprah about how she was “defying age”.

In the clip, the talk show host sat down with the multi-Grammy winning singer-songwriter on an episode of The Oprah Winfrey Show from 2003. The interview was seemingly normal but quickly took a weird turn when Oprah began questioning Dolly Parton about her plastic surgery.

“How are you defying age, Dolly?” Oprah asked. “Whatcha doing?”

Dolly seemingly brushed off the question initially and joked that she was a “cartoon” so she just looks “the same all the time”.

But Oprah pushed back, citing Dolly’s history of getting “some work done”. She included that the “9 to 5” singer had “some tucks and pulls and sucks” done in the past.

“Yes, I have, and I’ll have some more when I need them,” Dolly Parton responded.

The beloved singer then offered a “funny” anecdote about how she had told the “girls” who worked on her tribute album, Just Because I’m A Woman.

“I have a funny little thing I was telling the girls – all the girls that are singing on this tribute album, a lot of them are very young,” Dolly explained. “I said I was already into plastic surgery when they were still sleeping on plastic sheets.”

The snippet of the 2003 interview eventually made its way onto Twitter, where it quickly went viral. Several fans praised Dolly for her witty response while others lambasted Oprah for trying to “embarrass” the music legend.

“I feel like Oprah wanted her to be embarrassed, but Ms Dolly said ‘nope’,” they wrote.

i feel like oprah wanted her to be embarrassed but ms dolly said “nope” pic.twitter.com/QuYnxx1fNT

She was so salty!!!!! pic.twitter.com/65OPqkrRex

You can’t shame someone who isn’t ashamed

Dolly’s acceptance of herself is honestly the best gift she gives us, even with ALL she gives. I’d love to stop apologizing & feeling shame for normal things. She’s a true Lama (And her family call her that so it’s perfect).

Ugh everytime I see this I get so frustrated, Oprah always judging others for no reason. pic.twitter.com/TLfgZ2I1AF

“and i’ll have some more when i need them” aka pic.twitter.com/wlcxEdxqAt

Later in the Oprah interview, Dolly Parton explained that she does “whatever I need to do” to “keep myself up”. She also spoke openly about encountering mental ill-health problems when she entered her 40s.

“I really had a lot of problems during that time with a lot of female problems and just hormones, and so it just was a depression thing I went through,” Dolly explained.

She assured everyone that she was “okay now” and admitted it was “one of the best things that ever happened to me” because it made her “take inventory”.

“I’d never slowed up,” Dolly Parton shared. “I’d been working since I was like 10 years old.”