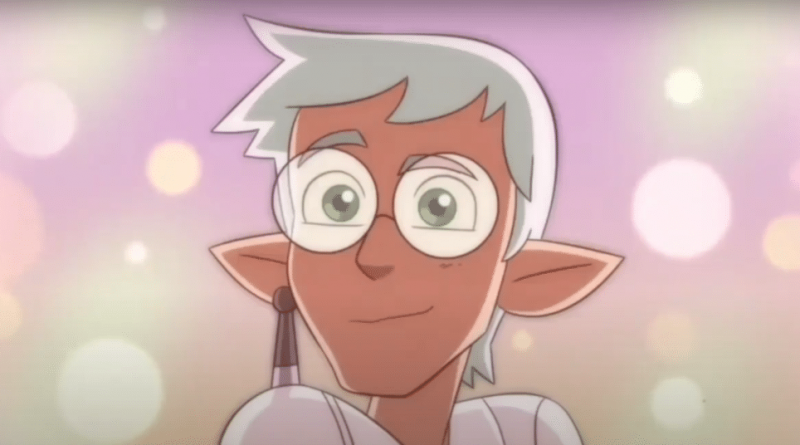 The character of Raine Whispers is non-binary and uses they/ them pronouns. (YouTube/ Disney)

The Owl House, which airs on the Disney Channel, follows Luz, a 14-year-old Dominican-American, on her adventures after she falls through a portal into another world.

Although Luz is a human, she befriends a witch named Eda, also known as the Owl Lady, and becomes her apprentice.

The second season of The Owl House kicked off this month, and on Saturday (24 July), fans were introduced to a brand new character – Raine Whispers.

Raine is voiced by Avi Roque, a non-binary Latinx actor and voice artist.

I guest star as Raine Whispers (pronouns: they/them), the sharp and hardworking Head Witch of the Bard Coven, in the new episode of #TheOwlHouse
premiering July 24 at 10:00am ET/PT on #DisneyChannel and DisneyNOW. Make sure to check it out!! pic.twitter.com/zRkaGIDAgd

Roque shared on Twitter: “DREAM COME TRUE. I guest star as Raine Whispers (pronouns: they/them), the sharp and hardworking Head Witch of the Bard Coven, in the new episode of The Owl House… Make sure to check it out!”

Fans were overjoyed, with one writing on Twitter: “This is amazing, I love that the character has a queer, non-binary Latinx voice actor and that they’re non-binary themselves! That is so important for representation!”

RAINE IS THE FIRST NON-BINARY DISNEY CHARACTER THE OWL HOUSE IS REALLY MAKING HISTORY I LOVE THIS SHOW SO MUCH pic.twitter.com/mTECosioWa

Another tweeted: “Honestly it felt surreal in the best possible way to actually hear a character be referred to by they/ them pronouns on Disney Channel.”

In 2020, during the show’s first season, it was confirmed that The Owl House‘s protagonist is canonically bisexual, when Luz and her once-enemy Amity began to grow closer, and eventually went to prom together.

The show’s creator, Dana Terrace, wrote on Twitter at the time that it had always been her intention to include “queer kids in the main cast”.

“When we were greenlit I was told by certain Disney leadership that I could NOT represent any form of bi or gay relationship on the Channel,” she tweeted.

“I’m bi! I want to write a bi character, dammit! Luckily my stubbornness paid off and now I am VERY supported by current Disney leadership.”