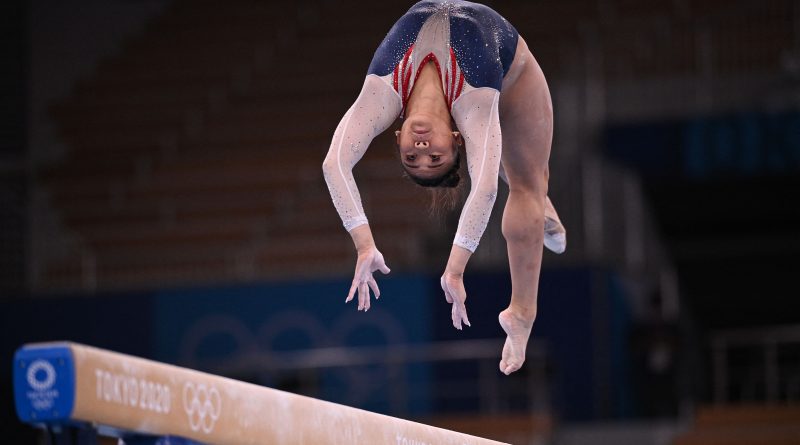 USA’s Sunisa Lee (gold) celebrate son the podium during the medal ceremony of the artistic gymnastics women’s all-around final during the Tokyo 2020 Olympic Games at the Ariake Gymnastics Centre in Tokyo on July 29, 2021.

If last year’s biggest corporate media challenge was launching subscription streaming services, this year’s unifying dilemma is figuring out what to put on them.

The tension between how to balance streaming video, theatrical release and linear TV is leading to some peculiar choices bound to confuse consumers in what’s becoming an increasingly jumbled landscape.

“The challenge all of these companies are battling — the central question — is what content goes where, who decides, and why?” said Rich Greenfield, a media analyst at LightShed Partners.

The programming decisions will ultimately reform how the public consumes media. So far, most media companies have marketed streaming video as a complement to traditional pay television. This is why so many of the products are named with the suffix “plus” — Disney+, ViacomCBS‘s Paramount+, Discovery+, etc.

In the long run, it’s possible each streaming platform will become the home for all of a media company’s programming. The “plusses” will essentially be lopped off. ESPN+ may just be ESPN, with everything ESPN has to offer.

But the world isn’t there yet. And the results are increasingly confusing for consumers as new programming is made specifically for streaming services, and the best of linear TV still doesn’t show up on streaming.

For scripted television series, media executives have largely made the decision that streaming services will be the home for the highest quality original programming. Disney, AT&T‘s WarnerMedia, Comcast‘s NBCUniversal and ViacomCBS are all attempting to convince Wall Street they can grow beyond traditional cable television. They’re using new hit shows, including “The Mandalorian,” “Mare of Easttown,” and “Yellowstone,” as bait to entice subscribers. The results have varied from service to service, but all of the major new subscription products are growing by millions of customers each quarter.

For movies, there’s disagreement at a film-by-film level across the different services. Disney put Pixar movies “Soul” and “Luca” directly on Disney+ for no additional charge upon release. For “Jungle Cruise,” “Black Widow” and “Raya and the Last Dragon,” the company decided to make users spend an additional $30 to stream the movies before eventually making them free with a subscription. NBCUniversal placed “The Boss Baby: Family Business” on its paid tier of “Peacock” but only released “F9” in theaters. WarnerMedia decided to place its entire slate of 2021 films directly on HBO Max but won’t do that for blockbuster movies in 2022.

For news and sports, most media companies have kept their most valuable programming exclusively on traditional cable TV. The most-watched primetime programming on CNN, MSNBC and ESPN is still locked inside the cable bundle. This has allowed executives to push against the steady but not yet overwhelming surge of pay-TV cancellations, keeping alive a highly profitable business that brings in billions of dollars each year.

The variety of choices has led to a complicated ecosystem because NBCUniversal is attempting to achieve several goals at once. The company wants to push Peacock subscriptions, appease pay-TV distributors who have agreed to many years of fee increases because they were receiving unique content, and maintain expensive TV advertising rates by attaching commercials to exclusive live programming.

“It’s the innovator’s dilemma in action,” said one veteran broadcast television executive. “You know the linear TV world is collapsing, but you’re trying to stay on the Titanic for as long as possible. At the same time, you’re setting up the lifeboats, which are digital and streaming.”

Disney is staring down a major business dilemma as soon as next year with “Monday Night Football.” The company secured rights to stream the perennially most-watched cable series on ESPN+ in its new TV rights deal with the National Football League in March. But Disney and ESPN haven’t said anything about when it will actually include “Monday Night Football” on ESPN+.

ESPN is by far the most expensive network on cable TV. It gained that distinction by being the only way Americans can watch “Monday Night Football” and other popular sporting events. If Disney starts moving previously exclusive programming from ESPN to ESPN+, pay-TV distributors will push back on future rate increases and millions of consumers will be given another reason to cancel cable TV.

The math makes this calculus tricky. Beginning Aug. 13, Disney will charge $6.99 per month for ESPN+ after a recent price increase. But Disney makes more than $9 per month per cable subscriber for ESPN, according to Kagan, the media research division at S&P Global, in pay-TV distribution fees. When bundled with the other ESPN networks, Disney Channel and ABC, Disney makes more than $16 per month.

In other words, for every customer canceling cable, Disney loses more than $16 per month. It will need to start charging more for its streaming products to break even, and that’s not even counting the loss in advertising associated with its linear programming, which dwarfs digital video ad revenue.

“Nobody is ready to unplug the linear ecosystem, because it brings in so much cash,” Greenfield said. “So they’re all balancing how to manage legacy assets with future investments that are free cash flow negative to show Wall Street that they’re trying. They’re all walking the tight rope.”

NBCUniversal and WarnerMedia announced this month they’ll hire hundreds of new employees to beef up their streaming news services.

The decision to create separate programming for streaming — some of which may duplicate the content of what’s already being broadcast on linear TV — can be viewed in different ways.

Skeptically, it could be seen as a waste of resources, filled with redundancies, as a “moment in time” decision to keep exclusivity in the cable bundle that may no longer exist in two or three years.

But NBC News executives say the investment acknowledges streaming audiences aren’t the same as linear viewers. That should lead to programming decisions that acknowledge digital viewers tend to be younger and more diverse.

“We’re always thinking about ways to optimize our journalism for each distribution platform,” said Noah Oppenheim, president of NBC News. “How do we engage these new audiences? Sometimes the answers lead to different faces on screen, different approaches to storytelling, a different lens on the world.”

It’s unclear if there’s actually an audience for an all-streaming news network — especially one that demands consumers pay a monthly subscription fee, such as CNN+, which debuts in 2022. The notion of programming to a younger audience is suspect, as a video news broadcast, whether streaming or on traditional TV, may simply not appeal to those under 25. The decision to invest more in streaming news could lead to a gradual decline in investing in broadcast or cable productions if total revenue is shrinking.

NBC News Chief Digital Officer Chris Berend said he’s confident further investment in NBC News Now will pay off because he can already see the growth in time spent on the existing product, which launched in 2019. NBC News Now is free for consumers, backed by advertising.

“We are incredibly excited about the millions of hours audiences spend with NBC News NOW and how that continues to grow as we continue to invest,” said Berend. “That time spent, which includes more than an hour per visit on some platforms [like YouTube], is a clear indicator we are satisfying our audience across many platforms, each with their own demographic nuances.”

Disclosure: NBCUniversal is the parent company of CNBC.