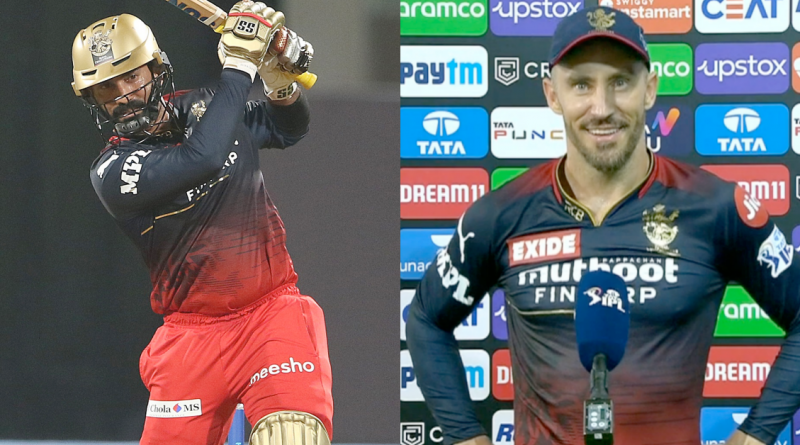 Royal Challengers Bangalore won their 4th game of the season against Delhi Capitals here on Saturday. Faf du Plessis though wasn’t particularly happy with the way the top order played. He, in the post-match presentation, said that the top-order needs to be better.

The top order of Faf du Plessis, Anuj Rawat and Virat Kohli all departed for just 40 runs and left RCB in a state of bother.

Bowlers Did A Good Job With The Ball: Faf du Plessis

Royal Challengers Bangalore were put to bat first but they struggled to get a good start and lost wickets at regular intervals. First, it was Glenn Maxwell who brought the side on track and then it was Dinesh Karthik and Shahbaz Ahmed who finished things off exceptionally well to put up a massive total on board. From 75-4 to 189 in 20 overs, was a massive recovery by RCB.

Faf on the batting display of his side said: “I think it is important from a top-order perspective that we contribute runs. We haven’t as a top order, but the other guys are doing so. Batting is tricky upfront, but the way Maxi put pressure back on them was vital. But to get 190 you needed special innings, and credit goes to the two boys Shahbaz and DK.”

RCB’s bowlers gave away a lot of runs in the game against Chennai Super Kings so it was important for them to make a good comeback and defend the target against Delhi Capitals. So, despite DC getting off to a flying start, RCB bowlers found a way to get back into the game.

On the team’s impressive bowling performance, Faf said, “We felt like we haven’t been as good as we would’ve liked at death bowling, so today we had a special plan. It was pretty wet out there, and with the start they had, many teams would fall away. But we stuck around. A good win. Experience is nice because you can trust players when it is going well and when it is not going well.”

He had special praise for Dinesh Karthik as he said, “The way DK is playing at the moment, I may sound like a broken record, but he is playing the best he has ever. Obviously lucky to have him in our side. He is so clear, calm and composed.”

Dinesh Karthik has indeed been in great form. He has been dismissed just once in the tournament so far.

Also Read: MI Vs LSG: ‘It’s A Special Day And A Special Hundred’ – LSG Captain KL Rahul On Scoring A Hundred In His 100th IPL Game