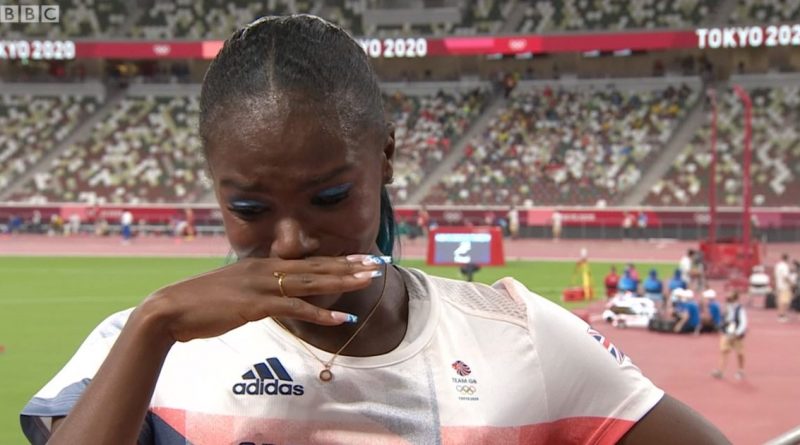 “It’s been a crazy, intense, heart-breaking period. I was in the shape of my life. Without a doubt”

Asher-Smith in tears during post-race interview with BBC

When the truth could finally be told, the tears flowed out of Dina Asher-Smith.

The ‘Face’ of Britain’s Olympic team had just seen a lifelong dream turn to dust through an injury she had hidden and secretly nursed for five weeks.

She had tried to convince herself it would be different, that a month after tearing her hamstring she could conquer the world.

She refused to chuck the towel in despite having only just come off crutches and gingerly getting back into spikes.

She clung to the champion’s mentality that if she only got to the start line in one piece, magic could still happen.

On an uncomfortably warm evening in Tokyo her best of intentions only added to the heartache and pain.

She did not narrowly miss becoming Olympic champion, she failed to even make the final.

Her semi-final confirmed what Friday’s heat had suggested: that she was lame and a shadow of her usual self.

Asher-Smith cam finish only third in her semi-final
(

Then, and only then, did she come clean and reveal the nightmare ordeal she had lived through since trials last month.

“It’s been a crazy, intense, heart-breaking period,” admitted Britain’s fastest woman, who will now not compete in the 200m. “I was in the shape of my life. Without a doubt.

“I’m not trying to sound arrogant but that is where I was. I tore my hamstring at 60 metres in the British Championship final, shut down and still ran 10.97.”

The sprinter’s coach has withdrawn her from the 200 metres
(

That was June 26, the day Asher-Smith says she was told it was a rupture. “That my hamstring and tendon were no longer attached,” she added. “That I would need surgery.

“That it would be three or four months til I walk again and then a year to sprinting.

“I was in floods of tears, I had a statement written saying why I wasn’t going to be selected.”

“I was in floods of tears, I had a statement written saying why I wasn’t going to be selected”

Before sending it she decided to put in a call to Hans-Wilhelm Müller-Wohlfahrt, the German doctor recognised as the best on the business. Just in case.

“I wanted to get an opinion on what kind of surgery I should have,” she said. “Whether there was some hamstring left or whether I should have a plastic or metal attachment.”

Müller-Wohlfahrt responded that while it was indeed torn he could get her to Tokyo.

Asher-Smith burst into tears, deleted her email, begged the selectors to hold her spot and boarded a flight to Munich.

“I was on crutches, off crutches, learning how to fully extend it again,” she said. “Walk, drills, jog, run. All the time counting down.”

She returned to the UK, flew to Tokyo on Tuesday last week and the following day put spikes on for the first time.

Elaine Thompson-Herah retains her Olympic title in a Games record time of 10.61 seconds
(

Seen in that light she did remarkably to run an 11.05sec semi-final. But being close yet so far only added to her sense of what might have been.

It left her on the outside looking in, watching her great pal Daryll Neita in a final won by reigning champion Elaine Thompson Herah in an Olympic record 10.61secs.

“But at the end of the day I’m an incredibly talented sprinter and I know what kind of calibre of athlete I am.

“I’d been dreaming about this for so long that, unless I couldn’t stand or do anything on the leg, it wasn’t an option for me to pull out.