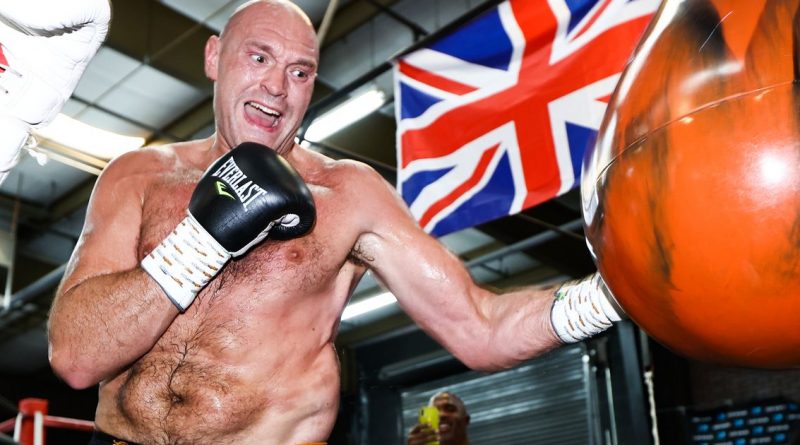 Wilder and Fury are set to fight for a third time at the T-Mobile Arena on October 9 after the American drew and lost in their first two bouts, but his coach believes he has an advantage this time

Boxing: Wilder works up a sweat ahead of Fury bout

Deontay Wilder’s trainer Malik Scott believes that Tyson Fury has struggled to keep up with his sparring partners in preparation for his trilogy with the American.

The pair will finally go to battle for a third time on October 9, with Fury having won their most recent outing after they drew in late 2018.

And Wilder’s coach Scott believes that rumours circulating in boxing circles about Fury getting hurt in sparring are true, saying that it isn’t surprising considering the quality of partner he has.

Fury brought in top heavyweights like Efe Ajagba, who will fight Frank Sanchez on the undercard of their bout, and 6-0 Christian Thun to help him prepare with

“When you hear those kinds of rumors with this type of high caliber fight, those are not rumors, those are facts,” Scott said on The PBC Podcast.

“Those so-called rumors came from legitimate sources – to his credit, I’m not even big on that.”

Scott has said that he isn’t putting too much stock into the reported training camp issues which Fury is facing, saying that he expects him to take some licks in an effort to prepare for the heavy hitting Wilder.

“When I see all those guys he was in camp with, I knew for sure he was getting touched up.

“I would hope that’s why he was bringing them in, so that he can fight them off and not get touched up, because that’s what you do when you’re trying to prepare for the likes of Deontay Wilder.

“So it’s not shocking – is it bragging rights to me, or anything like that? Not really, lots of guys get touched up in sparring. That’s nothing.”

Fury vs Wilder 3 was supposed to take place on July 24, but the bout was rescheduled due to a coronavirus outbreak in the Fury camp.

The outbreak apparently effected Ajagba as well as Fury himself, who only opted to take one of the two necessary covid vaccines to get full protection from the virus.

Bob Arum told World Boxing News that the bout likely wouldn’t have been cancelled had the issue arisen a few weeks prior, but said that it wasn’t possible to make up the training time by July 24.

“He has a beautiful home that he bought in Las Vegas, and I went over to the home the next day [after Fury tested positive],” Arum said.

“At that particular point, he was having trouble, not breathing, but his lungs were filled up with mucus or whatever.

“So if it had occurred two weeks earlier, he would have gone through with the fight.

“But he wasn’t going to be able for at least a week to do anything, and that would have given him just a couple of weeks, including the fight week, and that wouldn’t have been enough.

“When I talked to him, he wasn’t like a guy who was really sick, ready for an ICU, he was a guy who had all that congestion in his chest.”