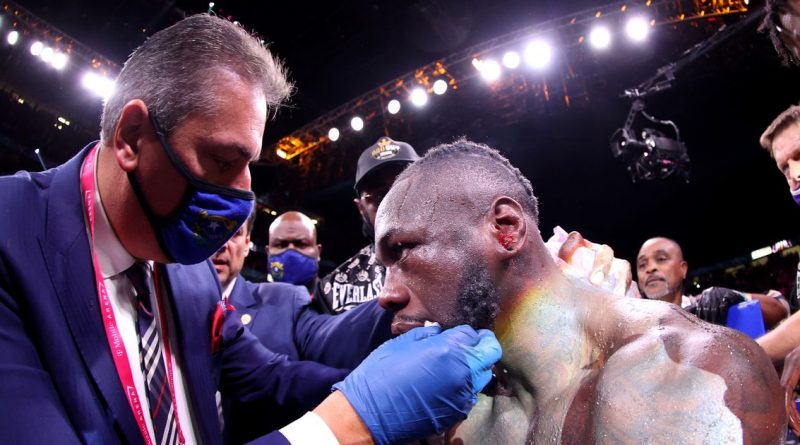 
Bob Arum has fumed that Wilder refused to look at him, after he went over to commiserate the defeat against Fury but has encouraged others to give him a pass for his actions

Deontay Wilder snubbed the commiserations of Tyson Fury’s promoter following his second successive defeat at the hands of the Brit.

The ‘Bronze Bomber’ was stopped in the 11th round by Fury in Las Vegas at the weekend as their rivalry was settled in concussive fashion.

Wilder, who suffered a broken hand during the modern-era epic, has been criticised for showing a lack of sportsmanship after the final bell when he was approached by Fury and Bob Arum.

And Fury’s promoter Arum was frustrated that Wilder would not “even look” at him after he went over to send his best post-fight.

“It is not good him not showing respect, but you and I haven’t been beaten up and concussed the way Wilder was that night,” Arum told IFL TV. “But I believe the charitable thing will to be to give him a pass, as I went over to him as I always do to the losing opponent.

“I told him he fought a great fight, and he wouldn’t even look at me and when Tyson went over he articulated something like ‘I have no respect for you’.

“But again look at what he had been through including what his body had suffered, so I think it would be appropriate to give him a pass on this occasion.”

Wilder was certainly not disgraced in defeat, and dropped the lineal champion twice in the fourth round.

But ultimately he came up short with Fury’s dominance paying off in the eleventh, ending the fight with a telegraphed right hand.

Although the American was quickly taken to hospital, where he was quickly diagnosed with a broken hand.

And the ‘Gypsy King’ was disappointed with his opponent’s post-fight reaction, claiming that Wilder showed a “lack of respect”.

Who will Wilder face on his return to the ring? Let us know your opponent prediction in the comments section below.

The former heavyweight champion will now undergo surgery to repair the damage, and is planning a comeback for next year.

His promoter was defiant in defeat, and is planning a showdown with Briton Anthony Joshua for his fighter next.

“My gut says the big fights. It’s not on the drawing board now, but he would love to get Fury back again,” Wilder’s co-manager Shelly Finkel told SunSport. “But again, it’s early and we have to get through Usyk and Joshua and see a couple of other possibilities.

“It’s a massive fight [Wilder vs Joshua], no matter what happens in the Joshua – Usyk fight. And I’m not sure that Usyk, even with his great skills, will be able to deal with the size of Fury.

“He’s healing and at this point, if everything is OK, after the hand surgery he’ll probably look to enter the ring mid next year, like April or May.”

His opponent Fury is now set to face an immediate challenge from domestic rival Dillian Whyte, who has been made mandatory challenger for his WBC belt.