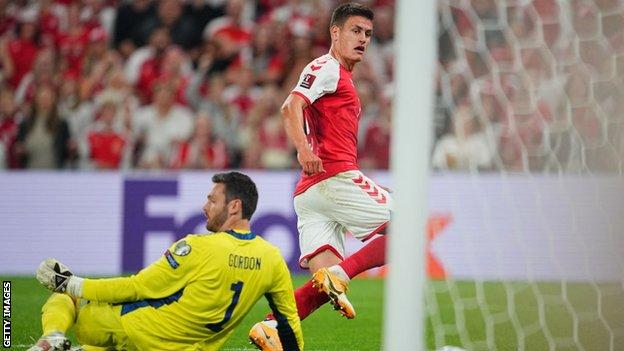 
Scotland’s World Cup hopes were dealt a serious blow as they were outclassed by a vibrant Denmark in Copenhagen to slip six points behind the group leaders.

Daniel Wass jumped above Kieran Tierney to head in an early opener, and Scotland’s composure deserted them as let in another 93 seconds later to go 2-0 down after just 15 minutes.

Joakim Maehle played a flick before running off Billy Gilmour to receive Mikkel Damsgaard’s pass and finish through the legs of Craig Gordon as Steve Clarke’s side folded.

Mercifully, the vastly-superior Danes did not add to their advantage but the result leaves Scotland with a nigh-on impossible task of overhauling them, with top spot guaranteeing a place in Qatar next winter, and second place reaching the play-offs.

Scotland have slipped two points behind both Israel and Austria in the race for the runners-up spot, with those two sides meeting in Haifa on Saturday.

At the same time, Clarke’s side are hosting Moldova at Hampden, with a critical trip to Austria to come on Tuesday.

With only 16 outfield players available due to injury and Covid-19 call-offs, Clarke was still able to name a strong XI, although captain Andy Robertson was chosen to play right wing-back in the absence of Nathan Patterson and Stephen O’Donnell.

But Scotland were dominated from kick-off and, though Denmark were impressive, the individual errors from the visitors gave them an unnecessary leg up.

Twice Denmark delivered balls from the left corner of the box towards Wass at the back post, but Scotland failed to heed the warnings as Tierney was left floundering when the Valencia wide man met Pierre Emile-Hjobjerg’s cross and planted the ball into the bottom corner.

Then, when calm heads were needed, Scotland folded. Andreas Skov Olsen drove down the right and played a one-two with Yousuf Poulsen on the edge of the box.

Scotland had eight players back, but two men went to Maehle and, when he offloaded the ball, Gilmour failed to follow him and he finished brilliantly after receiving the return pass.

It was a shambolic opening 15 minutes and despite an improved second half, a comeback never looked likely, although if Kasper Schmeichel had not produced a world-class save from Ryan Fraser then a sharper Scotland may have given their hosts an uncomfortable final 10 minutes.

Kasper Hjulmand’s side illustrated exactly why they are one of Europe’s top teams, buoyed by a run to the Euro 2020 semi-finals this summer in the face of adversity after Christian Eriksen’s cardiac arrest.

They have stormed Group F so far, scoring 16 goals and conceding none, and they could have had more at the Parken Stadium.

Maehle fired over not long after scoring, Gordon denied Poulsen when he was left unmarked at a set-piece, and the Scotland goalkeeper also had to save Thomas Delaney’s rasping shot after he was given time to set himself on the edge of the box.

Man of the match – Joakim Maehle

What did we learn?

Putting square pegs in round holes does not work. Without a recognised right-back, Clarke opted to play Robertson on his unfamiliar flank, and it backfired. The defence were all over the place under pressure from a strong Denmark team, and switching the Liverpool player back onto the left helped after the break.

The bigger picture, though, is that Scotland are regularly too passive without the ball. Czech Republic, and Croatia were given far too much time and space on the ball in the Euros, and it was the same in Copenhagen.

Linked to that is the lingering doubt about whether the 3-5-2 formation gets the best from Scotland’s technical midfielders, or Tierney and Robertson, the most accomplished parts of the team. Goals are a continued problem, and even the once reliable defence is conceding regularly.

Six points from the next two games looks like a necessity for Scotland to have any chance of a play-off berth. 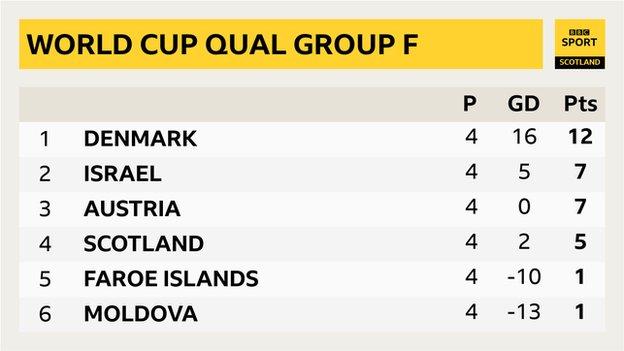 Scotland are at home to Moldova on Saturday (19:45 BST), and then travel to Austria on Tuesday (19:45) in a crucial tie. Denmark are away to the Faroes Island and then at home to Israel.