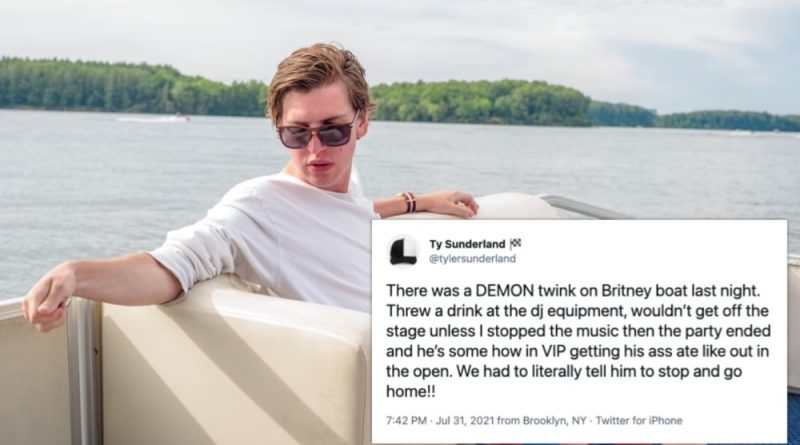 A “demon twink” who reportedly terrorised DJs before being rimmed at a Britney Spears-themed boat party has become this weekend’s unlikely Twitter anti-hero.

The tale of the “demon twink” was first told by Ty Sunderland, a DJ and producer of the Gayflower: It’s Britney Boat party.

“Threw a drink at the DJ equipment, wouldn’t get off the stage unless I stopped the music then the party ended and he’s some how in VIP getting his ass ate like out in the open.

“We had to literally tell him to stop and go home!!”

The story was corroborated by other party-goers who spoke of a “guy who was unabashedly getting his ass ate on Britney boat in the open in front of everyone“. Good for him.

Sunderland added that he wouldn’t have tweeted about it publicly if “he didn’t throw a drink at me and f**k up my microphone and DJ equipment” before uploading a screenshot of the alleged demon twink.

Footage of the demon twink was later leaked by other Britney boat attendees, showing him appearing to wear pink shorts and a “free Britney” t-shirt.

He then allegedly threw a drink at Sunderland only moments after Lady Gaga’s “Judas” began playing in what is a true crime against homosexuality.

Troye Sivan jokes he was the demon twink: ‘Sue me’

Suspicions were quickly raised over the true identity of the “demon twink” – and whether it could have been none other than professional twink and singer Troye Sivan.

“Literally so what if I got my ass ate on a boat in New York,” Sivan tweeted, “sue me.”

literally so what if I got my ass ate on a boat in New York, sue me

Quickly, calls grew for Ryan Murphy to write, direct and produce the “demon twink” origin film – all we can do is wait in fear.

A24 has purchased the rights to Demon Twink. Laura Dern is set to play me! pic.twitter.com/etpzMNL6QS

Others suggested that the demon twink might actually just be one in a long line of demon twinks.

“Let him have his anonymity. I don’t wanna know. I just hope he never throws drinks at DJ equipment again.”