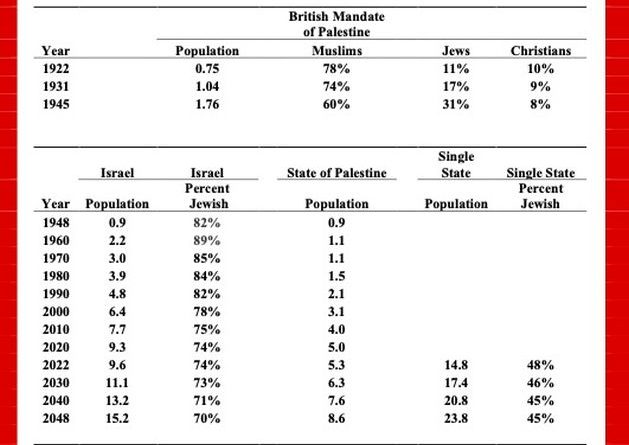 PORTLAND, USA, Oct 13 (IPS) – Demography is at the heart of the Israeli-Palestinian conflict as well as the fundamental obstacle to achieving to what each side has long desired: “???????”, “????”, or “peace”.

An Israeli-Palestinian peace can’t wait another year, another decade, or another 75 years. Too many Israelis and Palestinians are being killed, too many are being repressed, and too many are longing for peace.

The movement for a national homeland for Jews in Palestine, which prior to World War I was part of Ottoman Syria, began in earnest in the late 19th century amidst growing European anti-Semitism and the Zionist movement to establish a Jewish nation in Zion. The movement secured support among Western European governments, especially with the 1917 British Balfour Declaration supporting “the establishment in Palestine of a national home for the Jewish people.”

The tract of land in the Israeli-Palestinian conflict, established as the British Mandate of Palestine in 1922, is relatively small, about half the size of Denmark, and had a population of about three-quarters of a million. A century later, the population in that tract of land has increased nearly twentyfold to 14.8 million, with 9.6 million in Israel and 5.3 million in the State of Palestine.

The resident Palestinian population in the British Mandate of Palestine was predominantly Muslims and Christians. Their proportion was close to 90 percent in 1922. By 1931 the proportion declined to 83 percent and to 68 percent by the mid 1940s. In 1945 the estimated proportions of Muslims, Jews, and Christians of the population in British Mandate of Palestine were 60, 31, and 8 percent, respectively (Table 1).

With the establishment of Israel in 1948 in part of the former British Mandate of Palestine, the demographic compositions changed significantly with the displacement of an estimated 750,000 Palestinians. In the newly founded nation of Israel with a population close to one million the estimated proportion Jewish was 82 percent, which rose to a record high of 89 percent a decade later.

The demographic changes in the natural increase, migration and religious composition of the populations residing in the former British Mandate of Palestine continued throughout the second half of the 20th century as well as into the first two decades of the 21st century.

Moving to today, the current Israeli prime minister, Yair Lapid, speaking at the opening of the 77th session of the United Nations General Assembly, expressed his government’s backing for a two-state solution with the Palestinians.

The Israeli prime minister said, “An agreement with the Palestinians, based on two states for two peoples, is the right thing for Israel’s security, for Israel’s economy and for the future of our children.” He added that despite the obstacles, a large majority of Israelis support the two-state solution.

In his statement to the General Assembly, the Palestinian president, Mahmoud Abbas, took note of the Israeli prime minister’s call for a two-state solution. He added that Palestine also looks forward to achieving peace with Israel.

The Palestinian president said, “Let us make this peace to live in security, stability and prosperity for the benefit of our generations and all the people of the region.”

Also, in his remarks to the General Assembly, the U.S. president, Joseph Biden, called for a lasting peace between Israelis and Palestinians.

The American president said, “And a negotiated two-state solution remains, in our view, the best way to ensure Israel’s security and prosperity for the future and give the Palestinians the state which — to which they are entitled — both sides to fully respect the equal rights of their citizens; both people enjoying equal measure of freedom and dignity.”

At the time of the General Assembly, the Arab Peace Committee also promoted its two-decade old proposal calling for peace and normalization for Arab countries with Israel in return for a complete Israeli withdrawal from Palestinian land captured during the 1967 war and for the creation of a Palestinian state. That proposal is consistent with UN Security Council Resolution 242, which called for Israel to withdraw from occupied lands to secure and recognize borders in exchange for peace.

Various options have been proposed to address the nearly century long conflict. Those options include a confederation of Israel, Jordan and Palestine, autonomy-plus for the Palestinians, a federation of smaller Palestinian provinces or cantons, and the expulsion or transfer of the Palestinians from the West Bank, also referred to as Judea and Samaria by Israel (Table 2)

Amnesty International, for example, reported Israel enforcing a system of oppression and domination against the Palestinians wherever it has control over their rights. Similar findings were reported by Human Rights Watch, the UN Special Rapporteur, the Israeli human rights group B’Tselem, and the Palestinian human rights group Al-Haq. In addition, one quarter of American Jews now say Israel is an apartheid state.

Israel, however, rejects the accusation that it is practicing apartheid, saying “it is a democracy committed to international law and open to scrutiny”. Its government cites security concerns in imposing travel restrictions on Palestinians, whose uprising in past decades included suicide bombings in Israeli cities.

Some fundamental Israeli and Palestinian demographics provide some relevant insight into the likely religious composition in the one-state solution.

At the eve of the Jewish New Year 5782 observed on 25 September Israel’s population stood at 9.6 million residents, with 7.1 million, or 73.7 percent, being Jewish. The State of Palestine’s population is estimated at slightly more than half the size of Israel’s, at approximately 5.3 million.

Regarding the prospects of the two-state solution, while some stress that it is desirable and achievable, others believe that it is no longer an option primarily due to today’s realities. Nearly 700,000 Israelis are currently living in settlements in East Jerusalem and the West Bank.

In addition, many of Israel’s political leaders, even those of the center-left, do not support a viable, sovereign Palestinian state. Also, the former prime minister, Benjamin Netanyahu, has pledged to impose Israeli sovereignty in parts of the West Bank. In practical terms, some have concluded that Israel annexed the West Bank long ago.

Achieving a just and comprehensive two-state solution to the Israeli-Palestinian conflict is a formidable undertaking, with many serious challenges. Prominent among those challenges are the status of Jerusalem, the million plus Palestinian refugees in neighboring countries, religious extremists, international boundaries and security.

Given the facts on the ground and political realities, some have concluded that it’s time to abandon the traditional two-state solution and embrace equal rights for Israelis and Palestinians in a single state. The one-state solution, however, would clearly be at odds with Israel remaining a “Jewish and democratic state”.

Despite the weighty obstacles, a negotiated peace would lead to innumerable benefits. The Israelis and Palestinians could reap the rewards of peace, reconciliation, and prospects for a better future. In addition, peace would strengthen and expand relationships with countries in this strategically important region.

Joseph Chamie is an independent consulting demographer, a former director of the United Nations Population Division and author of numerous publications on population issues, including his recent book, “Births, Deaths, Migrations and Other Important Population Matters.”