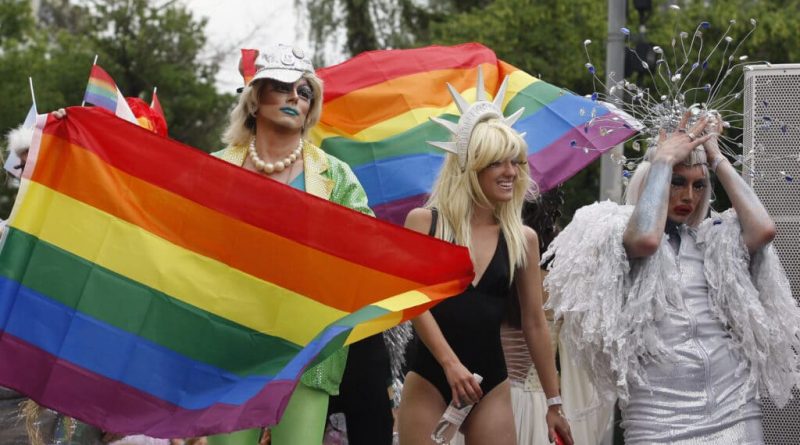 Crowds attend a Pride march in Kiev, Ukraine in June 2018. (STR/NurPhoto via Getty)

A Pride rave held outside the office of Ukrainian president Volodymyr Zelensky was ambushed by far-right thugs, but Pride-goers refused to be stopped.

On Friday (30 July), around 100 LGBT+ activists gathered outside of Zelensky’s office for a six-hour Pride rave.

Dressed in colourful raincoats pulled high to hide their faces, they danced for hours despite continued attacks by members of far-right group Tradition and Order, also responsible for previous assaults on Pride events in coastal city Odessa.

Members of the organisation, which has previously been linked to white supremacist groups, violently attempted to break up the demonstration by hurling bottles and other weapons at the revellers.

Police intervened with tear gas and rubber bullets, but France24 reported that victims felt they did “nothing about the violence” on the day itself. Officers said that two people were arrested after a scuffle with police, according to the outlet.

Members of various far-right groups also staged a counter-protest of their own just a few hundred meters away, bringing their own speakers and electronica to make a point.

None of these scenes are new or surprising – every year since 2013, when Kiev staged its first Pride parade, far-right assailants have violently interrupted Pride celebrations, hence the heavily-increased police presence.

Yet activists ultimately withstood the attacks and continued to rave draped in rainbow flags to protest wider, systemic injustices within the country.

“Deprived of the protection of the state, we use the only effective tool of direct democracy left to us – protest,” said organisers when they first announced the event last week. “And our protest will be loud and noticeable.”

Despite mounting pressure from the EU, President Zelensky has been slow to advance LGBT+ rights.

Since his election following a campaign based on liberal values back in 2019, president Zelensky has been criticised for not acting quickly enough to advance LGBT+ rights in his country, which many activists say still falls short in the protection of LGBT+ people.

There are other issues, too. “We have a problem with authorities who are supposed to defend us, most notably the police,” said Sofiia Lapina, an organiser of the event, in an interview with French-language publication Le Courrier D’Europe Centrale.

As it stands, there are no laws to protect LGBT+ people in Ukraine from hate crime or to support victims. Activists also told Le Courrier D’Europe Centrale of a lack of police training, which leaves victims feeling unable to file complaints and report their crimes.

There has been pressure from other EU member countries on Ukraine to adopt more protective laws, specifically Bill 5488, which would establish LGBT-inclusive hate crime protections and demand investigation into attacks on the community. The bill is still yet to be approved.

Especially in the last few months, EU representatives have cracked down on state-sanctioned homophobia in neighbouring Hungary and Poland, threatening their governments with financial sanctions and legal action.

Support for LGBT+ movements may have spilled across the country due to the increased presence of regional Pride parades, but last weekend’s rave for freedom proved there’s still work to be done when it comes to protecting the country’s LGBT+ community.