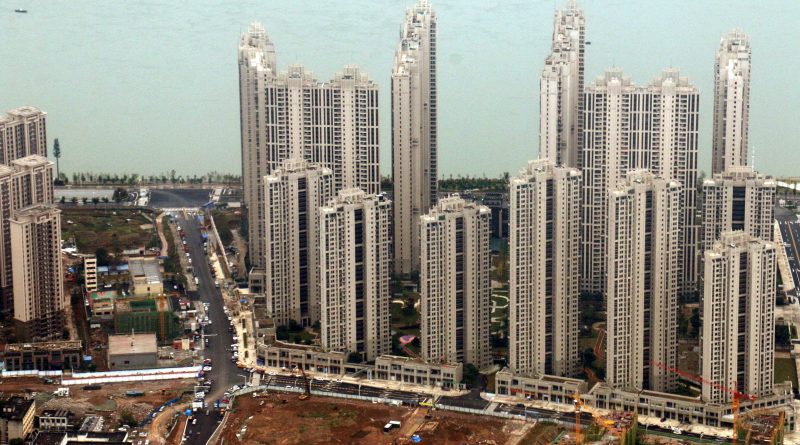 Aerial photography of “river view house” on the side of the Yangtze River. Yichang, Hubei Province, Oct. 16, 2020.

The fallout in China’s property sector is showing no signs of abating, as more developers face the threat of default — even as uncertainty over the fate of heavily indebted Evergrande looms.

All eyes will be on Chinese real estate developer Sinic Holdings, which warned last week that it’s not likely to repay offshore bonds worth $250 million due on Monday. There was still no word from the developer as of noon. CNBC has reached out to the company.

On Friday, another developer, China Properties Group, said it had defaulted on $226 million worth of notes, as it had failed to secure funds by the Oct. 15 maturity date.

They were not the first — Fantasia Holdings had failed to make a bond payment worth $206 million in early October.

This week, Evergrande will officially be in default if it doesn’t pay up for interest to a U.S.-dollar denominated offshore bond – the payment was due in late September but has a 30-day grace period. The company has kept silent on coupon payments on four other bonds that were due in the past few weeks.

These developments come as China’s central bank said Friday that the risks posed by Evergrande are “controllable,” and that most real estate businesses in the country are stable.

However, the People’s Bank of China also said property firms that have issued bonds overseas — referred to as offshore bonds — should actively fulfil their debt repayment obligations.

On Sunday, the central bank’s Governor Yi Gang made additional comments. He said authorities will try to prevent Evergrande’s problems from spreading to other real estate firms, according to Reuters.

He also said China’s economy was “doing well,” but faced challenges such as default risks from “mismanagement” at certain firms, the news agency reported.

Real estate and related industries account for about a quarter of China’s GDP, according to Moody’s estimates.

Things came to a head after the policy started to rein in developers. The world’s most indebted developer, Evergrande, warned twice last month it could default.

It has since missed three interest payments for its U.S.-dollar bonds. The stock has been suspended since Oct. 4, and ratings agencies have downgraded other real estate firms on concerns about their cash flows.

Trading of Chinese real estate bonds spiked to over $1 billion so far in October, from over $600 million in August, according to data from electronic fixed income trading platform MarketAxess. Evergrande’s 8.75% bond maturing in 2025 is currently the second-highest most traded emerging market bond on its platform, it said.

There was a new round of downgrades at other Chinese real estate firms last week.

CNBC has reached out for comment from each of the firms but has yet to hear back.

1. China Aoyuan
On Friday evening, S&P Global Ratings downgraded China Aoyuan, one of the bigger developers in China’s Guangdong province which focuses on the country’s Greater Bay area. The ratings agency pointed to its high debt, and said the firm’s move to reduce debt will slow over the next year.

It also flagged Aoyuan’s “considerable” bond maturities due in 2022, which will put further pressure on the property firm.

One thing we can be sure of is that the property sector is struggling.

“The company’s reduced visibility on revenue growth and continued margin pressure will hinder deleveraging efforts. Weakening cash generation will also pressure Aoyuan’s liquidity as it faces sizable maturities in 2022, despite our expectation that the company can still sort out the repayment under a tighter situation,” S&P said.

3. Greenland Holding
Preceding Friday’s downgrades, S&P on Thursday downgraded Greenland Holding — one of the bigger real estate developers which has prestigious properties in cities such as New York, London and Sydney. It also cited its “impaired” funding access, which will limit its ability to weather the downturn in the property industry. Fitch said it expects the firm’s ability to generate cash to slow.

“Greenland’s bond prices have deteriorated sharply again following wider investor concerns over the sector,” Fitch wrote. “A prolonged weakness in bond prices may hit the confidence of the company’s borrowers, suppliers, and purchasers.”

New home sales have dived in recent weeks and are now 25% below 2019 levels, said research firm Capital Economics in a note on Friday.

Meanwhile, developers’ land purchases have slumped as they “batten down the hatches” to ride out slowing sales and the constraints on their financing, the economist added. That points to a further pullback in new housing projects in the coming months.

“One thing we can be sure of is that the property sector is struggling,” he wrote.

Looking ahead, he expects more policy easing of the property sector, as authorities look to boost housing demand. This may include cutting minimum down-payment requirements for first-time home buyers, and rate cuts to push down mortgage costs, Evans-Pritchard wrote.

“We do not expect policymakers to relax constraints on developer financing or allow a sharp pick-up in overall credit growth,” he said. “The leadership, we think, remains committed to lowering developer leverage.”