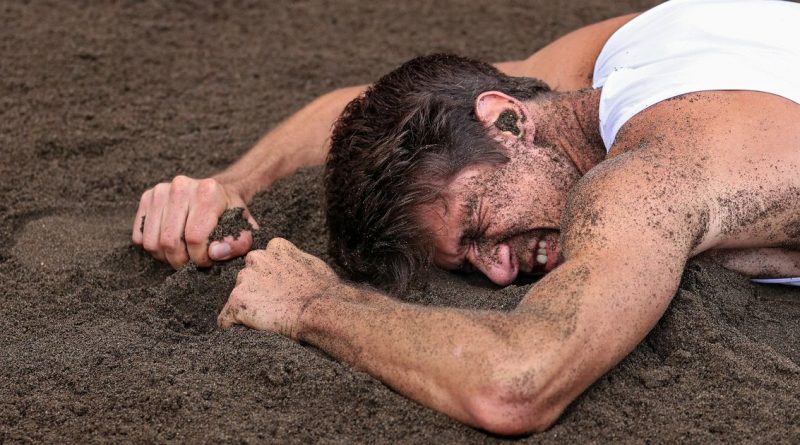 Belgian athlete Thomas van der Plaetsen looked in agony as injury struck during his long jump run-up in the men’s decathlon event. Van der Plaetsen ended up horizontal in the sand and was taken out of the stadium in a wheelchair.

Having already felt his hamstring go on his first attempt causing a failed jump, but was determined to get some kind of score for the event and so charged down the runway again.

Unfortunately for the 30-year-old, his body betrayed him again as his jumping leg gave way underneath him, causing the decathlete to face-plant into the sandpit in agony.

Immediate diagnoses made at the event suggest that it was van der Plaetsen’s right knee which caused the problem, and he was quickly removed from the stadium in a wheelchair for further assessment and treatment.

Van der Plaetsen’s story is a remarkable one. He recovered from testicular cancer in 2014 before winning a bronze medal in the decathlon at the World Indoor Championships in Poland later that year.

Tokyo 2020: Team GB’s medal table and how it compares to the Rio 2016 Olympics
Katarina Johnson-Thompson disqualified from 200m despite declining wheelchair

That success was followed by European gold in 2016, but the Belgian has so far failed to win an Olympic medal.

Heartbreaking injuries have been rife at the Tokyo Olympic games. Team GB medal hopeful Katarina Johnson-Thompson suffered a calf injury during the 200 metres in the heptathlon, an event from which she was eventually disqualified despite bravely getting to her feet to complete the race.

Van der Plaetsen left the stadium in a wheelchair
(

Dina Asher-Smith had to pull out of the 200 metres event after her hamstring problems which first arose in June flared up in the 100 metres heat. She had been a pre-tournament favourite for the sprinting event but her injuries meant that she didn’t qualify for the final.

Adam Gemili also suffered a brutal injury as his hamstring tore while he was practising box starts at the practice track. Gemili attempted to push himself through the pain as he started his 200 metre heat, but was unable to get any real speed and ended up limping over the finishing line.