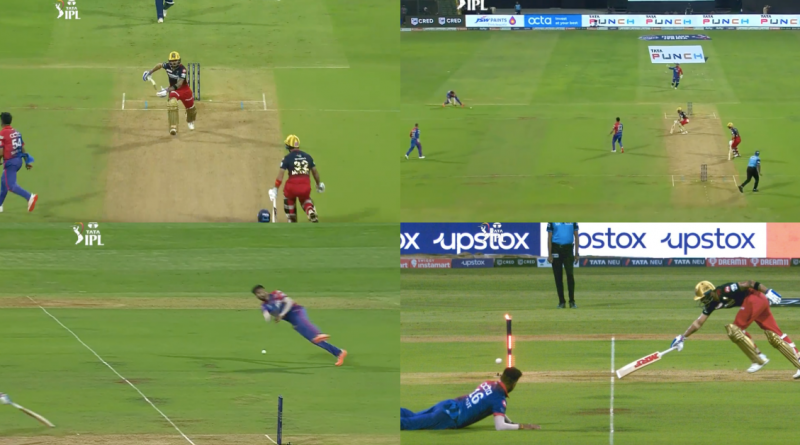 Virat Kohli and his affair with freakish dismissals are not ending just yet. In the match against Delhi Capitals on Saturday, he got run-out out for the 2nd time in the tournament when Lalit Yadav inflicted a brilliant run out to see the end of Kohli’s innings in the 7th over of the match.

Royal Challengers Bangalore after having put into bat were struggling at 40-3 with Kohli’s dismissal.

Virat Kohli had to come into bat in the 2nd over of the game itself as Anuj Rawat was trapped in front of the wicket by Shardul Thakur. Kohli played a couple of gorgeous drives and was looking in good touch as he has in the whole tournament so far.

He was batting on 12 of 12 when Shardul came into the bowl the 7th over. Shardul did not bowl fuller to Kohli rather he kept it there quarter lenght and did not let Kohli to score freely.

Virat in trying to steal a single then set off from the crease, casually, quite unlike him, but then Lalit Yadav was quick to reach to the bowl and flick it towards the stumps.

Kohli was found well short of his crease. This was the 2nd time Kohli has been dismissed in the form of a runout. Earlier this season, in the game against Mumbai Indians he was given LBW in controversial circumstances.

In the match against Chennai Super Kings, he was caught in the deep inside the powerplay as he hit the ball towards the only fielder outside the circle in that area.

Virat Kohli has looked good whenever he has batted but his dismissals have mostly been pretty extraordinary this season.

Kohli is looking for runs and he would hope that the slice of luck changes in his favour sooner rather than later.

DC vs RCB: Lalit Yadav Runs Out Virat Kohli With A Direct Hit: