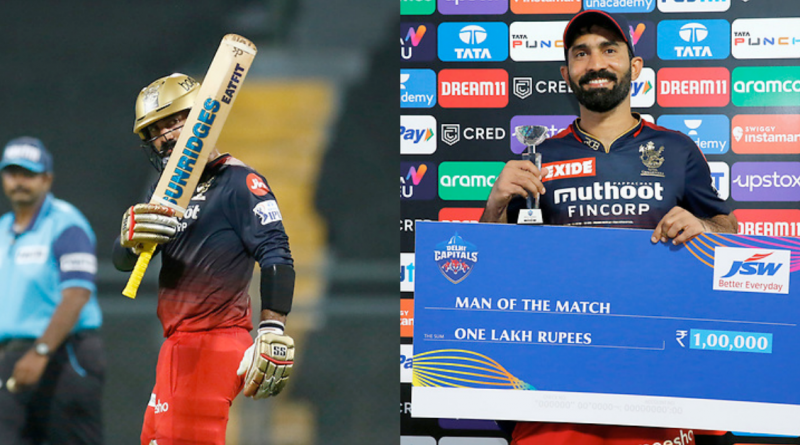 Indian wicket-keeper batter Dinesh Karthik after having played a match-winning knock for Royal Challengers Bangalore against Delhi Capitals admitted that he is preparing himself to be part of the Indian set-up again.

Karthik scored a crucial 66 off 34 balls and bailed his team out of a difficult situation and helped the team to put up 189 runs on the board.

I Have A Bigger Goal: Dinesh Karthik

Karthik has been in sublime form in the 15th edition of the IPL, he has scored 197 runs so far in the tournament and has been dismissed just once. Not only that his strike rate is also one of the best in the league so far.

After playing yet another match-winning innings for his side, Karthik in the post-match presentation said, “I must admit that I have a bigger goal. I have been working really hard. I have been trying to do everything to be a part of the Indian team.”

On his innings against DC, he commented: “Depends on the bowler, whoever is bowling well. I respected Kuldeep as he was bowling well. When you are batting at the death, you try and get under the ball more while hitting.”

He had a 90+ partnership with Shahbaz Ahmed, when asked about him, he said, “Shahbaz is a very special player, I am very sure he is going to do special things. He can hit a ball a long long way. And he backs himself which I like about him.”

RCB have 8 points now and they are sitting 3rd on the points table.

Also Read: MI Vs LSG: ‘It’s A Special Day And A Special Hundred’ – LSG Captain KL Rahul On Scoring A Hundred In His 100th IPL Game