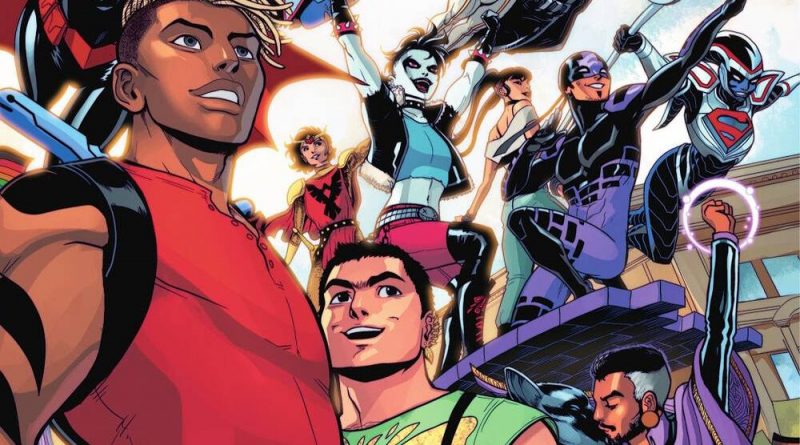 Justice League Queer, DC’s team of all LGBT+ superheroes, will return to save the world from Minister Blizzard in the new holiday anthology titled ‘Tis the Season to be Freezin’. (DC Comics/DC Pride #1)

After successfully saving a Pride parade earlier this year, DC’s all-queer Justice League returns to save the world from becoming a permanent winter wonderland.

There have been countless interpretations of the Justice League, and DC introduced an all-LGBT+ version called JLQ, or Justice League Queer, in time for Pride Month this year.

The queer superhero team was introduced in the recent DC Pride #1 short story “Love Life” which focused on Aqualad – whose name is Jackson Hyde – going on a date with Syl, an apprentice magician, to his first Pride, which is unfortunately ruined when Eclipso literally comes to rain on the parade.

After their Pride debut, the queer superhero team is leaping back into action for a festive one-shot anthology titled ‘Tis the Season to be Freezin’, on sale in mid-December. The 80-page holiday special features several stories starring DC’s most iconic heroes, villains and rogues including Robin, Mr Freeze, Harley Quinn, Flash, Bizarro and Captain Cold.

In an exclusive preview of the issue for AITP Comics, fans see the JLQ once again take on evil. The preview opens with Tasmanian Devil – a JLQ member and husband to Extraño, DC’s first openly gay superhero – warning the team of impending danger.

The JLQ – which also includes Crush, Traci 13, Bunker, Tremor and The Ray – must team up to fight the icy villain and save the world from its bone-chilling fate.

DC Comics first introduced the concept of Justice League Queer as one of 16 entries in a bracket tournament called Round Robin for a future comic back in March. Sadly, the all LGBT+ team was eliminated in the first round, but that wasn’t the end for the superheroes.

Thankfully, DC introduced the ad-hoc team of queer heroes formed by Gregorio De La Vega, aka Extraño, in its DC Pride anthology. Seemingly, the fan interest in the JLQ was decent enough that it warranted the elite team to be brought back in this new holiday special.

DC hasn’t revealed if there are any future plans for Justice League Queer. But there is room to add more heroes to its pantheon considering that Jon Kent, the Superman of Earth and son of Clark Kent, and Batman’s sidekick Tim Drake, aka Robin, both came out as bisexual this year.