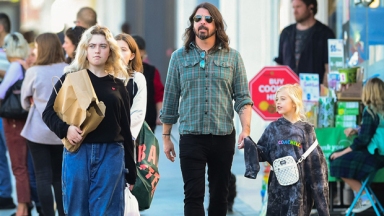 
Dave Grohl has lived many lifetimes. Before he was known as the leader of the Foo Fighters, Dave was beating the hell out of the drums for Nirvana, honing his chops in DC hardcore band Scream, and — per Rolling Stone‘s recounting of his memoir, The Storyteller – he almost became a member of GWAR. Yet, one of the most significant chapters in his life story is the one about his time as a father. Since 2003, Dave has been married to producer/director Jordyn Blum, and they have become parents to three daughters: Violet, Harper, and Ophelia.

That schedule got thrown into the dumpster in 2020 when the COVID-19 pandemic forced him to homeschool his kids. Though Dave’s mom, Virginia, was a public school teacher, it appears those skills weren’t passed down to him. “My kids know who I am, okay? I’ve read my report cards to my kids before, so they’re not necessarily going to come to me for anything academic – they just don’t,” he said to BBC Breakfast in February 2021, per Kerrang. “I could be a cheerleader, I could make you a great breakfast, and I could make you smile before you start your day, but you don’t necessarily want me in your history lessons. You don’t necessarily want me helping you with trigonometry.”

So, who are Dave Grohl’s kids?

Dave and Jordyn welcomed Violet Maye Grohl on April 15, 2006, per IMDB. So far, Violet has shown that Dave isn’t the only rock star in the family. In 2018, when she was a preteen, she joined her dad to cover Adele’s “When We Were Young” for a benefit at the Fox Theater in Oakland for the UCSF Benioff Children’s Hospitals, per Entertainment Weekly.

A 13-year-old Violet joined St. Vincent, Beck, and the surviving members of Nirvana – her father, Krist Novoselic, and Pat Smear – for a charity show for The Art of Elysium’s annual Heaven Gala in January 2020, per NME. With Violet singing at various points, the group covered “Heart-Shaped Box,” “Been A Son,” “In Bloom,” “Lithium,” and Nirvana’s MTV Unplugged version of David Bowie’s “The Man Who Sold The World.” In April 2021, Violet and Dave released a song together – a cover of “Nausea” from legendary LA punk band X.

In an Instagram post announcing the track, Dave spoke about how it was important to cover an X song with Violet. Dave shared that his grandmother’s maiden name was Bonebrake, which meant he might be related to D.J. Bonebrake, X’s drummer.

“It felt so meaningful to have the first song Violet, and I record together to be a tribute to our Bonebrake heritage,” he wrote. “As nervous as she was, she stepped up to the microphone and sang with the power and confidence of a seasoned pro as I engineered the session like a proud father, encouraging her to let it all out. I then sang my harmonies over her vocal in the chorus, our two voices blending perfectly in the mix, and we smiled upon listening to playback at full volume. It was a moment that superseded anything musical. A life moment that I will cherish forever. A family moment.”

More recently, Violet lent her dulcet tones to the tribute concert for Dave’s late bandmate Taylor Hawkins. After introducing the band made up of himself, Alain Johannes, Jason Falkner and Chris Chaney, Dave welcomed Violet to the mic, deeming her “the only person I know who can actually sing a Jeff Buckley song,” according to the outlet. Violet then wowed the crowd with her renditions of Jeff’s songs “Last Goodbye” and “Grace”.

Harper Willow Grohl arrived in this world on April 17, 2009. Like her older sister, Harper has followed in her father’s footsteps. While performing at Iceland’s Secret Solstice Festival in June 2017, Dave shared some great news. “About two weeks ago, my daughter said, ‘Daddy, I wanna play the drums.’ And I said, ‘Okay. Do you want me to teach you?’ She said, ‘Yes.’ And then I said, ‘Do you want to get up in front of 20,000 people in Iceland and play?’ And she said, ‘Yes,’” he said. Harper — just eight years old at the time — then joined the Foo Fighters to play Queen’s “We Will Rock You.” When Dave accepted a drum-off challenge from 10-year-old Nandi Bushell in 2020, he did so while playing on Harper’s kit, hinting that she might still be dedicated to drumming like her daddy.

“I think that when I look at Violet and when I look at Harper playing music, I don’t know if they’re at the age where they’d feel like if they’ve – they don’t feel one of the guys, because they’re just playing, you know? And I hope to see a change.  In my house, I’ve got a full rock band. And they’re all women, and it makes me really happy to see. It’s really cool,” Dave told PBS NewsHour in 2018.

Dave’s daughters – specifically Harper – are also interested in his past life with Nirvana. “Last night actually, my daughter Harper, she’s 11, she’s like, ‘Dad, can we just go drive around?’ She’s been stuck in the house for weeks,” Dave said during a visit on The Howard Stern Show, per Metalhead Zone. “So we jump in the car, in my van, this cool old Ford van from the ’60s, and we just drove around Hollywood, looked at it, it was like eight o’clock at night, just driving around. And ‘Come as You Are ‘came on the radio, and she started singing. She’s saying every word! I’ve never played her that record, we don’t talk about Nirvana and stuff, and she was singing every word to the song! That to me, that feels good.”

He also said that Harper asked him “if Kurt was shy.” Dave was slightly shocked since this was the first question Harper ever asked about Nirvana. “I was like, ‘Yeah, he kind of was.’ And then she said, ‘Was he shy around people he didn’t know – or was he also shy around people he did know?’ And it was interesting, it was really the first time she started really asking me questions about Kurt. That was a first. It was great.”

Dave and Jordyn’s third daughter, Ophelia Saint Grohl, was born on August 1, 2014. She also has a little bit of rock and roll in her, and she’s shown it as part of The Gohlettes (aka Ophelia, Harper, and Violet, who joined their dad for his tribute song to Nandi Bushell in 2020) and during a 2019 appearance on Ryan’s Mystery Playdate. “My daughter has been watching the show constantly,” said Dave during a behind-the-scenes clip, per People, “so it’s like meeting a real rockstar. I’m not the rockstar here. Ryan is.” Ophelia portrayed Fifi, a “Ryan Superfan,” who joined Ryan and the gang for a jam session. “Are you ready to rock?” Ryan asks. “I’m always ready to rock!” Fifi shouts. Considering who her father is – and who her sisters are – she wasn’t lying.