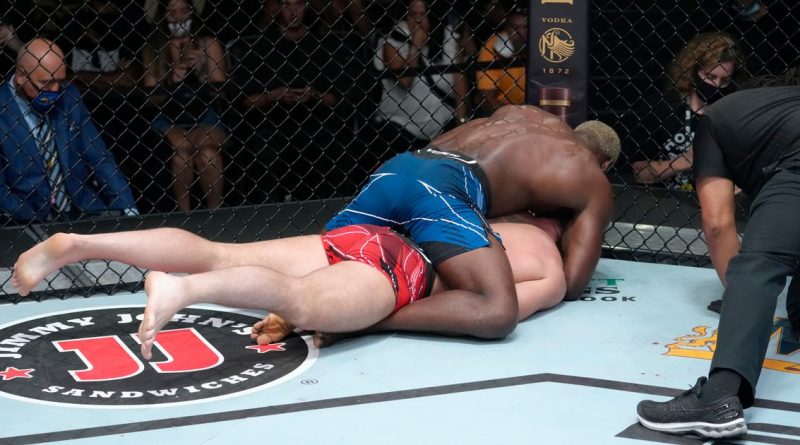 
The Scouse fighter was dominated for the opening two rounds before launching a monstrous comeback in the third, but he was ultimately submitted by the veteran Brunson

The Liverpool native was submitted in the third round after a dominant performance from the veteran Brunson on a night that went off otherwise without a hitch for the British fighters on the card.

Till was dominated in rounds one and two before launching a monstrous comeback in the third, hurting the American badly and almost landing a finish.

But Brunson was able to keep his head and land yet another takedown, which saw him ultimately take Till’s back and winning by ay of rear-naked choke.

Derek Brunson choked out Darren Till
(

And Brunson could have set up a potential title fight with the winner of Israel Adesanya and Robert Whittaker’s rematch with the comprehensive win over Till.

Brunson’s takedowns proved too much for Till throughout the night, with the 37-year-old almost finishing Till with ground-and-pound in the opening round.

And that continued in the second, leading to a fired up third round for Till.

“I’m not broke I’ll sit and wait,” Brunson said when asked what was next for him, with a world title fight seemingly now available for him.

“I know Izzy [Adesanya] and [Robert] Whittaker have got a fight coming up. I’ll sit and wait!”

It was a busy night for British fighters, with Jack Shore, Molly McCann, Paddy Pimblett and Tom Aspinall all picking up wins on the undercard.

The British-Lithuanian Modestas Bukauskas was the only other fighter to falter on the night, being stopped in round two by Khalil Rountree in a back-and-forth brawl.

But otherwise it was an impressive night for the travelling Brits, including the highly-touted Aspinall and top prospect Pimblett.

Welsh star Shore kicked off the night for the UK fighters with a dominant win over Liudvik Sholinian on the prelims to go 15-0 in his professional career.

And he was followed by Scouser Molly McCann, who put in a phenomenal showing against Ji Yeon Kim to earn her first win of the post-covid era.

And despite an early onslaught from the Brazilian that saw Pimblett badly hurt, the Liverpool native was able to come back to stop his rival in an exciting first round.

Unfortunately for the Brits, Bukauskas couldn’t get the job done against Rountree, but in the co-main event heavyweight Aspinall got the country back to winning ways.

Aspinall brutally stopped late replacement Sergey Spivak with elbows on the ground in his fourth straight UFC fight, likely improving his top 15 standing in the division.

But the main event wasn’t to be for Till, who after losing to Robert Whittaker last year may find himself slipping out of the middleweight top 10.