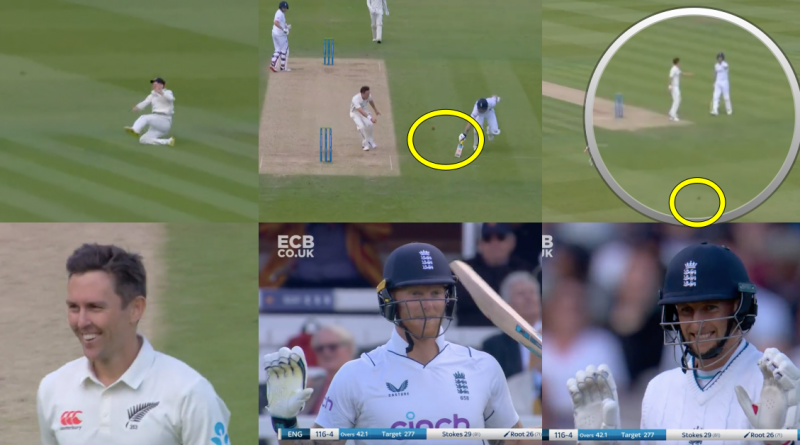 
England batter Ben Stokes almost had a deja vu during the third day of the Lord’s Test against New Zealand. The two teams are going head-to-head in the first of the 3-match Test series at the iconic ground.

After New Zealand set a target of 277 on the third day, England’s top order was once again exposed. They lost Alex Lees, Zak Crawley, and Ollie Pope with the scoreboard reading just 57.

Jonny Bairstow couldn’t hang around with his Yorkshire teammate, Joe Root, as his aggressive go-for-broke approach bit him hard against Kyle Jamieson. Ben Stokes, the new skipper, joined hands with the former captain at the crease.

Stokes got a huge reprieve when he was bowled off a no-ball bowled by Colin de Grandhomme. He went on to make the most of the chance and scored a well-paced fifty which has put England in the driver’s seat.

During the knock, there was a cheeky little moment where the tension at the Lord’s died down for a few seconds. After Root had pulled Trent Boult’s short delivery onto the leg side, the fielder dived at mid-wicket to stop the ball.

Stokes was scampering back at the non-striker’s end when the throw hit his bat and started running away towards the long-off boundary. The irony wasn’t lost on any of the players with Stokes immediately apologizing while the players laughed it off.

During the final stages of the epic 2019 World Cup final between the two sides, a throw from Martin Guptill had ricocheted off Stokes’ bat and run away for a boundary. It was a huge moment in the game and proved to be decisive in helping England tie the game.

They went on to win the super over after another tie. Although it was quite a while ago, the Kiwi players relived the heartbreaking moment once again, albeit on a funny note this time around.

Also Read – IPL 2022: Whenever You Go To Him, He Is There To Help – Yash Dayal On Performing Under Hardik Pandya’s Leadership