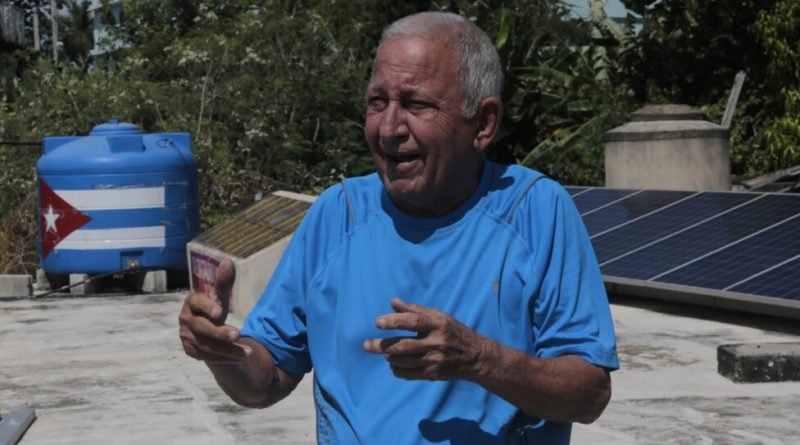 HAVANA, Sep 23 (IPS) – After making a model for a solar heater, installing solar panels and creating a device to dehydrate food with the help of the sun, Félix Morffi is turning his home into a space for the production and promotion of renewable energies in Cuba.

With two tanks, glass, aluminum sheets, as well as cinderblocks, sand and cement, the 84-year-old retiree created, in 2006, a solar heater that meets his household needs, which he proudly displays.

“You build it today and tomorrow you have hot water; anyone can do it, and if they have a bit of advice, all the better,” said the retired mid-level machine and tool repair technician.

A magnet magnetically treats the water by means of a system that purifies it and makes it fit for human consumption, without additional energy costs.

Also on the roof of the house, a cluster of 16 photovoltaic panels imported in 2019 provide five kilowatts of power (kWp) and support the work of his small automotive repair shop where he works on vehicles for state-owned companies and private individuals.

This is an independent enterprise carried out by Morffi on part of his land in Regla, one of the 15 municipalities that make up Havana.

In addition to covering his family’s household needs, he provides his surplus electricity to the national grid, the National Electric Power System (SEN).

As part of a contract with the Unión Eléctrica de Cuba under the Ministry of Energy and Mines, for the surplus energy “we receive an average of more than 2,000 pesos a month (about 83 dollars at the official rate), more or less the amount we pay for our consumption during the same period,” Morffi told IPS in an interview at his home.

But he said that the rate of 12.5 cents per kilowatt of energy delivered to the SEN perhaps should be increased if the government wants more people to produce solar energy.

Since 2014, Cuba has had a Policy for the Development of Renewable Energy Sources and their Efficient Use, and in 2019, Decree Law 345 established regulations to increase the share of renewables in electricity generation and steadily decrease the proportion represented by fossil fuels.

Other regulations have been added, such as the one that exempts foreign companies that carry out sustainable electricity generation projects from paying taxes on profits for eight years.

Other decisions seek to encourage self-sufficiency through decentralized generation with the sale of surplus energy to the SEN, as well as tariff exemptions to import photovoltaic systems, their parts and components for non-commercial purposes.

According to studies, Cuba receives an average solar radiation of more than five kilowatts per square meter per day, considered to be a high level. There is enormous potential in this archipelago of more than 110,800 square kilometers which has an annual average of 330 sunny days.

By the end of 2021, some 500 million dollars were invested in expanding the share in the energy mix of solar, wind, biomass and hydroelectric sources, according to data from the Ministry of Energy and Mines.

The solar energy program appears to be the most advanced and with the best opportunities for growth.

The solar parks operating in the country contribute 238 megawatts, more than 75 percent of the renewable energy produced locally.

But clean sources account for barely five percent of the island’s electricity generation, an outlook that the authorities want to radically transform, setting an ambitious goal of 37 percent by 2030.

It is a matter of national security to substantially modify the energy mix in Cuba, which is highly dependent on fossil fuel imports and hit by cyclical energy shortages.

The island is in the grip of an energy crisis with blackouts of up to 12 hours or more in some areas, due to the deterioration of the network of 20 thermoelectric generation blocks with an average operating life of 30 years and in need of frequent repairs.

Added to this is the rise in the international prices of diesel and fuel oil, as well as the shortage of parts to keep the engines and generators powered by these fuels operational in Cuba’s 168 municipalities.

Putting on the brakes

Government authorities point to the U.S. embargo as a factor holding back the growth of renewable energies, blaming it for discouraging potential investors and hindering the purchase of modern components and technologies.

On the other hand, inflation, the partial dollarization of the economy and the acute shortage of basic necessities, including food, leave most families without many options for turning to the autonomous production of clean energy, even if they recognize its positive environmental impact.

One of the authorized state-owned companies markets and assembles 1.0 kWp solar panel systems for the equivalent of about 2,300 dollars in a country where the average monthly salary is estimated at 160 dollars, although it is possible to apply for a bank loan for their installation.

People who spoke to IPS also mentioned the difficulties in storing up solar energy for use at night, during blackouts or on cloudy or rainy days, considering the very high price of batteries.

Morffi said more training is needed among personnel involved in several processes, and he cited delays of more than a year between the signing of the contract with Unión Eléctrica and the beginning of payment for the energy surpluses contributed to the SEN, as well as “inconsistency with respect to the assembly” of the equipment.

Although there is a national policy on renewable energy sources, “there is still a lot of ignorance and very little desire to do things, and do them well. Awareness-raising is needed,” he argued.

Morffi believes that despite the economic conditions, with a little ingenuity people can take advantage of the natural elements, because “the sun shines for everyone; the air is there and costs you nothing, but your wealth is in your brain.”

He shows a dryer that uses the heat of the sun to dehydrate fruits, spices and tubers, which he assembled mostly with recycled products such as pieces of wood, nylon, acrylic and aluminum sheets.

Other equipment will require a significant investment, such as the three small wind turbines of 0.5 kWp each that he plans to import and a new batch of 4.0 kWp photovoltaic solar panels, for which he will have to apply for a bank loan.

At the back of his house, a small solar panel keeps the water flowing from a well for his barnyard fowl and an artificial pond holding a variety of ornamental fish as well as tilapia for the family to eat.

The construction of a small biodigester, about four cubic meters in size, is also at an advanced stage on his land, aimed at using methane gas from the decomposition of animal manure, for cooking.

According to Morffi, who manages these activities with the support of several family members, his home is on its way to becoming an experimental site for the use of renewable energies.

A specialized classroom may be built there, so that students can learn about the subject in situ.

So far in the design phase and in discussions with potential supporters, this local development project could even install “solar heaters in places in the community such as the doctor’s office, a day center and a cafeteria for the elderly,” said Morffi.

He said the idea should receive support from international donors, the government of the municipality of Regla, and Cubasolar, a non-governmental association dedicated to the promotion of renewable sources and respect for the environment, of which Morffi has been a member since 2004.

“We are willing to advise anyone who wants to install solar panels, heaters or dryers, everything related to renewable energies. We have knowledge and experience and have something to contribute,” he said.