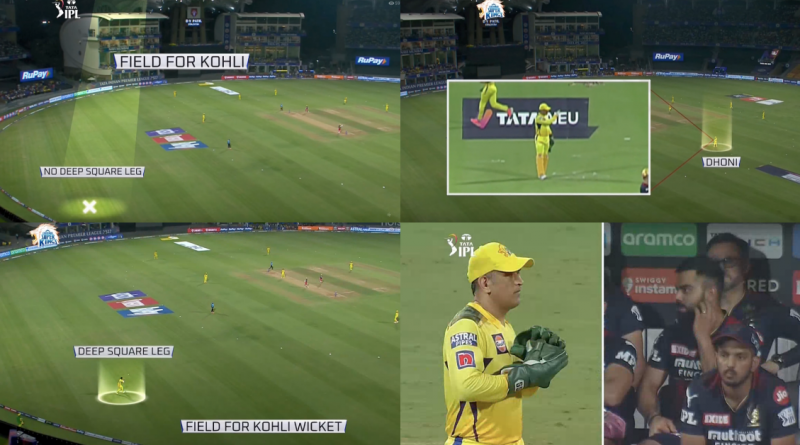 
Former CSK captain MS Dhoni is still the sharpest mind in the game despite only playing in the Indian Premier League (IPL) and showed it once again as he plotted the wicket of RCB’s Virat Kohli in their clash in the ongoing IPL 2022 tournament on April 12, 2022.

The Chennai Super Kings (CSK) took on Royal Challengers Bangalore (RCB) at the DY Patil Stadium in Navi Mumbai in the 22nd match of the tournament. RCB captain Faf du Plessis won the toss and decided to bowl first.

Ruturaj Gaikwad (17) and Moeen Ali (3) failed to do much, but Robin Uthappa hit 88 in 50 balls with 9 sixes and 4 fours, while Shivam Dube slammed 95* in 46 balls with 8 sixes and 5 fours. The duo added 165 runs for the third wicket. RCB bowlers and fielders could only see the ball landing in the stands every other delivery as the two batters massacred the opponents to put on 216/4 in 20 overs.

In reply, the RCB top-order only managed 21 runs ad Anuj Rawat made 12, Faf du Plessis made 8 and Virat Kohli fell for 1 run to leave RCB 42/3 in 6 overs. The key wicket of these all was that of former Royal Challengers Bangalore captain Virat Kohli.

A video shared on Twitter showed how it was MS Dhoni who set up the field placing in order to get MS Dhoni out. The video shows on fielder at the deep square leg before Kohli takes the strike, however, when the right-hander comes to bat, Dhoni quietly moves the fielder to that vacant position.

Mukesh Choudhary bowls exactly as planned and Kohli flicked the ball straight into the hands of Shivam Dube stationed there.