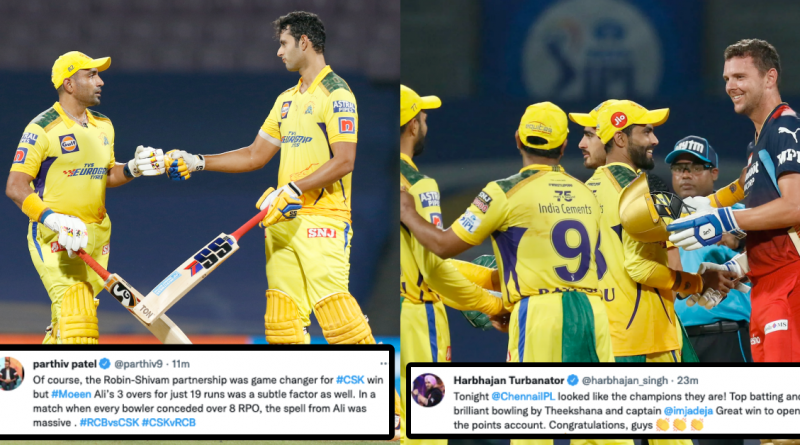 Chennai Super Kings (CSK) ended up registering their first win of the IPL 2022 season with a comfortable victory over Royal Challengers Bangalore (RCB) at the DY Patil Stadium on Tuesday.

Put in to bat first again, Chennai was down to 36/2 with Ruturaj Gaikwad and Moeen Ali back in the hut. At the 10 over mark, they were crawling towards an average total but the final ten overs changed the complexion of the game.

In the run chase, Bangalore’s main batters, Faf du Plessis and Virat Kohli were back in the hut inside the first 5 overs. Glenn Maxwell injected some much-needed momentum into the chase but he was done in by Ravindra Jadeja.

Shahbaz Ahmed and Suyash Prabhudessai tried their level best to keep RCB in the chase. Add to that a stunning cameo from Dinesh Karthik and Bangalore was afloat. However, Dwayne Bravo cleaned up Karthik soon after to end any hopes.

The win is Chennai’s first of the season after suffering four straight losses. As for RCB, their 3-game win streak comes to an end but they will be happy with the way their middle-order performed.

Of course, the Robin-Shivam partnership was game changer for #CSK win but #Moeen Ali’s 3 overs for just 19 runs was a subtle factor as well. In a match when every bowler conceded over 8 RPO, the spell from Ali was massive . #RCBvsCSK #CSKvRCB pic.twitter.com/XwEUVrd9Mb

Despite top order struggle, @RCBTweets players showed tough fight and it was mainly due to DK. @ChennaiIPL has finally opened their account in the points table but RCB looks like a different side in this #IPL2022 . #CSKvsRCB

Tonight @ChennaiIPL looked like the champions they are! Top batting and brilliant bowling by Theekshana and captain @imjadeja Great win to open the points account. Congratulations, guys 👏 👏 👏 #CSKvRCB #IPL2022

Finally CSK on the board… RCB you fought well.

How relieved was captain #jaddu! That’s the reason why teams like #csk have a strong following, they always manage to pull a special trick out of the bag. Expecting the same from the #Mumbaiindians tomorrow. #CSKvsRCB #TATAIPL #CricketTwitter

For the @ChennaiIPL fans, there is a little yellow glow to the night sky. Now, the @mipaltan fans will search for the lovely blue hue tomorrow. #TATAIPL

Promising first win of the season for @ChennaiIPL 💛

Finally CSK on the board… RCB you fought well.

The best thing happened to RCB in this Season 👑 pic.twitter.com/66ew3xnUht

CSK vs RCB in last 4 matches in IPL:

What a confusing match this was really can’t decide who’s back to original form RCB or CSK?#RCBvsCSK