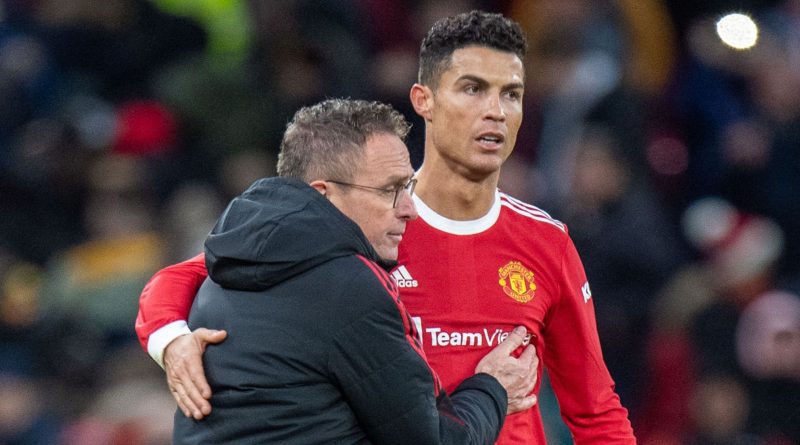 Cristiano Ronaldo says Ralf Rangnick needs time to implement his ideas at Manchester United after a stuttering start to life as the club’s interim manager.

Rangnick replaced Ole Gunnar Solskjaer in December after the Norwegian was sacked on the back of just three wins in 11 games – a run of form that included heavy defeats to Leicester, Liverpool and Watford.

But while Rangnick has steadied the ship – with four wins from seven matches and just three goals conceded – United’s football has left much to be desired, and they have scored more than one goal in a game just once since his arrival.

Ronaldo has scored twice since Rangnick’s arrival and much was made of his suitability to play in the manager’s system, given the German’s desire for his forwards to press high up the pitch.

But in an exclusive interview with Sky Sports, Ronaldo called for Rangnick – who will take up a consultancy role at United at the end of the season – to be given patience.

“Since he arrived five weeks ago he changed many things,” said Ronaldo. “But he needs time to put his ideas across to the players.

“It takes time but I believe that he is going to do a good job. We know we aren’t playing the best football but we have many games to improve.

“Since he arrived I think in some points we are better, but he needs time. It’s not that easy to change the mentality of players and the way they play, the culture, the system like that. I believe that he is going to do a good job.”

This is a breaking news story that is being updated and more details will be published shortly. Please refresh this page for the latest updates.

Visit skysports.com or the Sky Sports App for all the breaking sports news headlines. You can receive push notifications from the Sky Sports app for the latest news from your favourite sports and you can also follow @SkySportsNews on Twitter to get the latest updates.