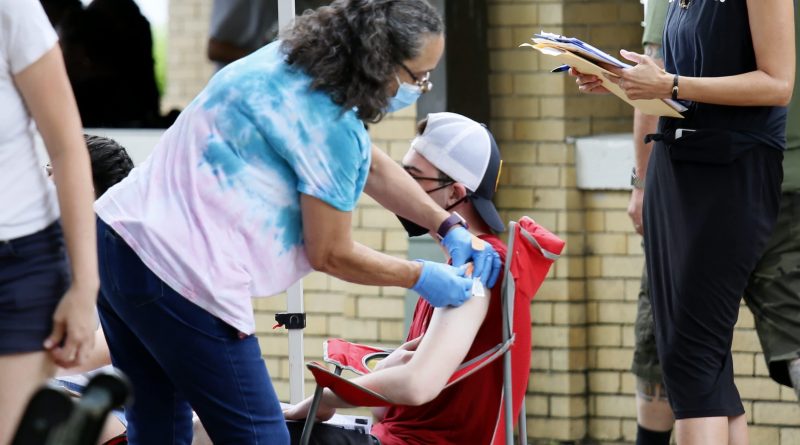 A man gets vaccinated against COVID-19 at a vaccination festival in New Orleans, New Orleans, Louisiana, the United States, on May 29, 2021.

More and more people who were once vaccine hesitant in several Southern states are now getting their first shots as the delta Covid variant rips through areas of the U.S. with low immunizations rates.

In Arkansas, Mississippi, Louisiana and Alabama, the seven-day average of daily reported first doses has more than doubled since the start of July, Centers for Disease Control and Prevention data shows, as the outbreak has worsened nationwide.

Over that same time period, average daily case counts have grown from about 13,000 per day across the country to roughly 94,000 per day as of August 4, according to data compiled by Johns Hopkins University, with the overwhelming majority of new infections among those who are unvaccinated.

“Clearly, Americans are seeing the impact of being unvaccinated and unprotected and they’re responding by doing their part, rolling up their sleeve and getting vaccinated,” White House Covid czar Jeff Zients told reporters Thursday.

In Arkansas, which is seeing the third-worst outbreak in the country based on daily new cases per capita, vaccinations have nearly tripled. On July 1, the state was administering a seven-day average of 2,893 first doses in arms, representing new people getting their first shots, according to a CNBC analysis of CDC data. By August 4, that number shot up to a seven-day average of 8,585 first doses administered per day.

Mississippi, experiencing the fourth-worst outbreak in the country, saw a 178% increase by August 4 in first doses administered since the start of July, with Louisiana at a 128% increase and Alabama, hosting the fifth-worst outbreak nationwide, seeing a 109% rise.

Louisiana is experiencing the worst outbreak of new Covid cases per capita in the country and record hospitalizations after the delta variant took aim at the state’s mostly unvaccinated population.

The state’s governor has reimplemented a mask mandate until at least Sept. 1 in an effort to slow down transmission. Though even with the recent surge in vaccinations, Louisiana still ranks fifth-lowest in the country when it comes to residents that are fully vaccinated at 37.2%.

Behind Louisiana is Arkansas at 37% of residents fully vaccinated, Wyoming at 36.7%, Mississippi at 34.8% and Alabama at 34.6%, according to CDC data.

Covid cases with severe outcomes are also on the rise, according to U.S. officials. The seven-day average of daily hospitalizations is up 41% from a week ago with the average daily death toll up 39%, CDC Director Dr. Rochelle Walensky said Thursday.

Studies have shown that unlike the original Covid strain, the delta variant is much more transmissible and requires two vaccine doses for the body to have a fighting chance at preventing infection and severe symptoms.

“Even if somebody decided today that they wanted to get the vaccine, it’s going to take some time before their body and immune system is educated to be able to deal with it,” Gigi Gronvall, an immunologist and senior scholar at Johns Hopkins Center for Health Security told CNBC. “You want to make sure you don’t get exposed before your body can have a chance to shut that virus down.”

Still, residents in hard-hit states initiating vaccination will help slow the spread of the virus sooner than later, and could prevent hospitalizations and deaths in the future.

Patients of varying ages hospitalized with Covid in states like Missouri, Florida, Arkansas and Louisiana are expressing regret and pleading with their communities to get vaccinated after they initially failed to get the shot.

Overall, the U.S. is reporting an average of about 677,000 daily vaccinations over the past week as of August 4, up 11% from one week ago.

The number of first vaccine doses is climbing more sharply than the overall rate. An average of about 446,000 first doses were administered every day over the past seven days as of Wednesday, according to the CDC, up 17% from the week prior.