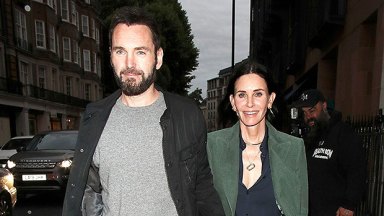 
Courteney Cox, 58, celebrated her birthday in the best way on Saturday, June 18. While in London, the actress was accompanied by her beau, Snow Patrol band member Johnny McDaid, while the two took a stroll down the city streets.

That day, the two were seen sweetly holding hands while Courteney rocked olive green trousers and a matching retro inspired blazer. She adorned the look with a dark button up blouse with a plunging neckline and large hoop earrings. Her signature raven locks were pulled back, while she sported a trendy middle part. Meanwhile Johnny looked dashing in sleek black slacks, a simple gray t-shirt, and a minimalist dark jacket.

The Friends star also took to her official Instagram account the following day to post some adorable snapshots of her and Johnny wearing the same outfits. In the precious photographs, the couple smooched each other while looking directly into the camera on a bright sunny day. “Date night in London” the caption affectionately read.

Courteney Cox’s Hottest Looks From ‘Friends’ To ‘Cougar Town’ & Beyond

The cute couple were also seen enjoying a date night in Malibu in November 2021 at the celebrity favorite restaurant Nobu. There, Courteney rocked gray flare jeans and a black top while letting her dark wavy hair flow down to her shoulders. Her boyfriend then stood by her side while wearing all black attire.

Courteney and Johnny got together in 2013, and announced their engagement the following year. The pair broke things off in 2015, however, they reconciled their relationship in 2016. Courteney informed the public in 2019 on The Ellen Show that the two chose not to get engaged again when they got back together.

David Arquette’s Wife: Everything To Know About Christina McLarty, Plus His Marriage To Courteney Cox

“He’s not my fiancé. We were engaged to be married, but now we’re just together,” Courteney explained. “We broke off our engagement and he moved to England. Then we got back together, and it’s actually better than it was before. Everything’s better.” She continued, “The distance — after that breakup, we were apart for six months — that really showed us a lot.” Clearly absence did make the heart grow fonder for Courteney and Johnny.