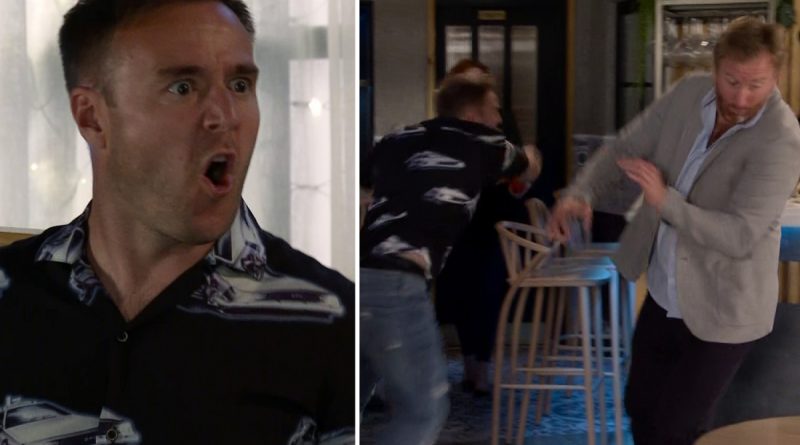 The mechanic – who is played by actor Alan Halsall in the ITV soap – lashes out after being referred to as “mate”.

“Don’t worry, I’m going,” slurred Tyrone. “Then you can enjoy your romantic little evening in peace.”

But as Tyrone became increasingly belligerent to Fiz and Phil – he had humiliation coming when Curtis told him his card had been declined.

As Tyrone phoned the bank insisting it would all be fine, Fiz went to the loo and Phil kindly paid the bill to stop all the awkwardness.

However Tyrone reacted with fury.

“What have you done that for? Give him the money back, he’s not paying my bill.

“You’ve taken my missus, my kids and then you’re in here flashing the cash around.”

With that he swung at Phil, enraged and caused him to fall on broken glass.

Viewers were disgusted at Tyrone for his behaviour.

One wrote: “Of course Tyrone crashes Fiz’s date with Phill how childish is he?”

A second said: “Tyrone is making a right fool out of himself. He’s got Alina now. He needs to leave Fiz alone!”