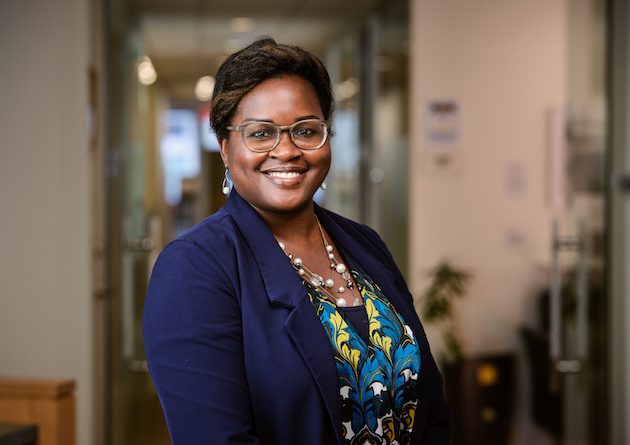 SHARM EL SHEIKH, Nov 16 (IPS) – Climate change is worsening injustice globally, and the poor and vulnerable communities are the most affected. It is time the world acted on fulfilling human rights and building a liveable planet, says Yamide Dagnet, director for Climate Justice at Open Society Foundations.

“We are so slow to take climate change seriously,” she told IPS in an exclusive interview on the sidelines of the COP27 conference in Sharm El Sheikh, in which she speculated that greed and doubts have crept in about solutions.

“The solutions are there,” Dagnet says. “But we need to organise ourselves and create blended solutions in tackling climate change and upholding human rights.”

COP27 is in its final week to hammer agreements on saving the world from climate change doom.

Injustice is a key factor needing addressing because climate change is crippling the most vulnerable communities and countries that contribute the least to the problem.

“This is injustice. In every country of the world, the social justice sentiment is that the most marginalised communities are suffering the most. You also have the intergenerational aspect, which means that the youth will pay the consequences for what is happening now,” says Dagnet, who co-founded and launched Allied for Climate Transformation by 2025, a consortium that amplifies the voice and priorities of vulnerable countries and communities.

Excerpts of the interview:

IPS: You are advocating for climate justice. Does climate change have anything to do with human rights?

YD: We need to understand why vulnerable nations and communities are frustrated and demanding legitimate social justice from the Paris Agreement and climate talks. One of the objectives of the UNFCCC is to first stabilise global temperatures. We have obviously failed to do that. Temperatures have increased.

Another objective is to protect the most vulnerable. Over the past decades, there has been a focus on how to stabilise and reduce emissions and maximise the means that were to be provided to populations dealing with the impacts of climate change.

If you reduce emissions, you reduce the impacts of climate change. But we failed. We have even slid backwards since the Glasgow COP, which goes against human rights.

At this COP in Sharm El Sheikh, frustration is at its highest because, as science has it, there has not been a lot of reduction in emissions at all. Even if we were taking the radical step now to reduce emissions, we would still have to deal with a changing climate and have intensified and more frequent disasters.

You have everywhere the notion that the delays and prioritisation of some issues over others and the neglect of the priorities in developing countries and communities exacerbate vulnerability resulting in losses and damages. Now there is an effect on livelihoods as some (communities) are displaced and can’t rely on their water sources, like in Chad. (This results in) conflict between pastoralists. Or (in the Pacific) atoll nations that know that unless something radical is done, they will be underwater – (and ask) what will happen to their cultural heritage. You have so much at stake beyond economic damage.

IPS: Are human rights and justice at stake at the COP27 talks?

YD: Absolutely. Everything is at stake. Every human does not need to (just) survive. Human beings have a right to thrive and be protected. Another human rights issue is that some of our most unsung heroes, protecting our forests, and demanding justice from global corporations, are the most affected. The number of environmental defenders being killed is increasing. This is a human rights issue too.

IPS: Would you say climate change laid bare the inequalities in the world today?

YD: Yes. It is a vicious loop. Unfortunately, inequalities in the world (and) within each country will be exacerbated because of climate change. The impact of climate change will affect the most vulnerable populations from class and gender, with intergenerational impact and from a race point of view. All aspects of inequality will be amplified.

When you do not even have the issue of inequality, you will see that climate change and security are going to be exacerbated because climate change is a threat multiplier when it comes to security and economic vulnerability. For example, a country can do everything that the International Monetary Fund asks it to do to reduce debt and have a good GDP, and within eight hours of a hurricane (hitting), it can lose 200 percent of its GDP. The victims are the people and their livelihoods, which are changed in eight hours.

IPS: On the agenda of the COP27 talks is the issue of loss and damage, with developing countries seeking support from developed countries for the damage they have suffered due to climate change. Do you think the current negotiations can unlock funding crucial for developing countries to get help?

YD: We have already made history. Thirty years ago, the small islands brought up the issue of losses and damages, but nothing was done. They were told to reduce emissions first, and then there was no compensation liability. All progress was hindered because of the fear developed countries had of (paying) compensation and liability when developing countries were asking first and foremost for solidarity. (The developed world) promised to help them be more resilient and reduce emissions, but none of those commitments was fulfilled. This is now why the issue of reparations is coming. They have been asking for space to discuss this issue and how to finance those different losses and damage. The type of finance you need to deal with a disaster like a hurricane or a drought is very different from what you need when a whole nation (displaced and needs to) deal with the loss of cultural heritage.

Vulnerable countries are fighting hard to get a financial mechanism, but we need to figure out how to resource this mechanism. We know that trillions are needed. Look at (one country like) Pakistan; we are talking of billions. We have failed since 2009 to mobilise $100 billion a year when we know we need trillions. The more we wait it will be difficult to achieve, and we need to think pragmatically and forcefully not only to create the fund but also about how it will be replenished.

What will it come to? Should developing countries go to the International Court and have developed countries tried for climate crimes against humanity, or can we wait for COP200 for a solution?

Vanuatu has not waited to start. (They’re) saying: Hey! Enough is enough, and we need to take this to the International Court of Justice. So, whether this will result in a country, or seven countries being sued for not doing what they promised to do and taking action and providing reparations remains to be seen. We know this is creating a lot of anxiety because developed countries do not want any liability or (pay) compensation. The other aspect is that the polluters who need to pay are not just the governments but also the corporate sector. Fossil fuel companies are profiting the most from the current energy crisis, for example, so this is why there are discussions about a windfall tax and how to use such a tax on fossil fuel companies to compensate for loss and damage.

IPS: Are the voices of those suffering the most from the impacts of climate change being heard by COPs?

YD: I think at COP27, the UNFCCC is putting on one of the most inclusive COPs, but there is still a lot of work to make it more inclusive and effective. This is why philanthropies like us also have a responsibility and can use catalytic funding to really support and protect the movement of those voices that need to be heard. The supporting accountability mechanism outside the countries is to empower civil society to hold their governments and companies accountable, to use naming and shaming, and litigation is important, but it is also important for international platforms like the UNFCCC to have the right accountability mechanism to create the pressure.