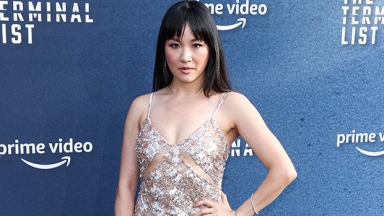 
Constance Wu alleges that she was sexually harassed by a senior production member at Fresh Off the Boat. According to The New York Times, the Crazy Rich Asians beauty, 40, is making the claims in her forthcoming memoir Making a Scene. In one jarring incident while at a sporting event, the newspaper reports, he allegedly “placed his hand on her thigh, his hand ultimately grazing her crotch,” and she then asked him to stop. HollywoodLife reached out to ABC for comment but has not yet received a response.

“Fresh Off the Boat was my first-ever TV show,” she said. “I was thrown into this world. I don’t have parents in the industry. And because I was 30, people thought I knew what I was doing. It made me paranoid and embarrassed.” The newspaper further reported that the producer was controlling in various ways during season 1 back in 2015, doing things like expecting her to “run all her business matters past him and telling her what to wear.” They ultimately fell out after an argument, according to the outlet, and stopped speaking.

Per Variety, at the Atlantic Festival on Friday, September 23, the Hustlers actress explained why she didn’t speak up sooner. “I kept my mouth shut for a really long time about a lot of sexual harassment and intimidation that I received the first two seasons of the show,” she said. “Because, after the first two seasons, once it was a success, once I was no longer scared of losing my job, that’s when I was able to start saying ‘no’ to the harassment, ‘no’ to the intimidation, from this particular producer. And, so I thought: ‘you know what? I handled it, nobody has to know, I don’t have to stain this Asian American producer’s reputation, I don’t have to stain the reputation of the show.’”

The revelations come after Constance made a heartbreaking confession in July after severe backlash for some controversial tweets about disliking the show’s renewal back in 2019. She returned to the platform with a lengthy message about the debacle and how it affected her. “I haven’t been on social media in almost 3 years,” she wrote via Twitter on July 14. “Tbh, I’m a little scared, but I’m dipping my toe back in to say I’m here and while I was gone I wrote a book called Making a Scene. This next part is hard to talk about…but I was afraid of coming back on social media because I almost lost my life from it.”

She went on to explain that her “ill-timed” sentiments had to do with “another project I was really passionate about.” She also apologized, writing that the tweets were “not nice, and I am sorry for that.”

Jesse Powell: 5 Things To Know About R&B Singer Dead At 51