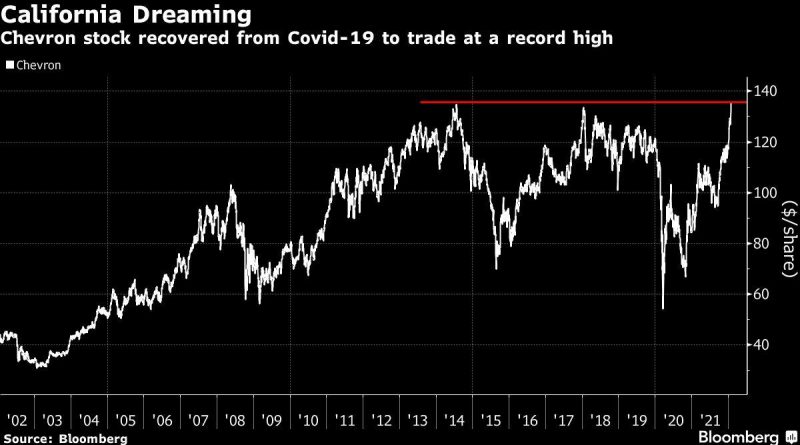 The U.S. supermajor’s overseas upstream business and domestic refining network fell short of analysts’ fourth-quarter expectations by a combined $1.3 billion. Chevron is especially vulnerable to gyrations in foreign markets because they account for more than 60% of the driller’s oil and natural gas output.

Chevron linked the earnings miss to the shrinking value of legacy assets including a stake in an Australian gas development known as the Northwest Shelf, which the company has been trying to sell since 2020. Higher royalty and tax payments tied to rising commodity prices also played a role, as well as the timing of some gas trades, Chevron said in a presentation on its website.

Worldwide, the company warned that oil and gas production may be flat or down as much as 3% this year compared with 2021.

Per-share results, adjusted for one-time items, came in at $2.56, according to a release on Friday. That was 56 cents below the average of analyst estimates compiled by Bloomberg. The shares dropped 3.2% to $131 at 9:32 a.m. in New York.

Chevron is the first of the five international supermajors to disclose end-of-2021 figures and the result may prompt Wall Street to curb expectations for a banner quarter.

On a cash flow basis, Chevron’s financials appeared much healthier. Free cash flow, the key metric watched by analysts, rose to an all-time high for the second consecutive quarter.

On an annualized basis, free cash flow was 25% higher than the previous record.

The announcement comes a day after Chevron shares touched a record high in response to a larger-than-expected dividend boost. Net income climbed to $5.06 billion compared with a $665 million loss a year earlier. On a full-year basis, Chevron’s $15.6 billion profit was the highest since 2014, when international crude prices topped $115 a barrel.

Analysts had expected bigger things from Chevron after gas shortages in Europe and Asia swelled Big Oil’s cash flows and geopolitical tensions in Eastern Europe help push crude above $90 a barrel for the first time since 2014. Morgan Stanley is forecasting the return of $100 crude. At that point, some analysts say the industry could start to suffer from demand destruction, as high energy prices dampen economic growth.

In contrast to previous boom cycles, Big Oil is pledging to remained disciplined with its reinvestment and production growth profiles. Chief Executive Officer Mike Wirth has been adamant that the driller won’t be enticed into spending on risky, new mega-projects. Instead, the focus is on modest, profitable production growth in proven areas like the U.S. Permian Basin and Kazakhstan.

With so much cash flowing in and debt ratios already the lowest among its peers, Chevron increased its buyback target to about $4 billion a year in December, up from $2.5 billion previously. Analysts at Tudor Pickering Holt & Co. say there’s “ample room” to accelerate shareholder returns beyond this level.