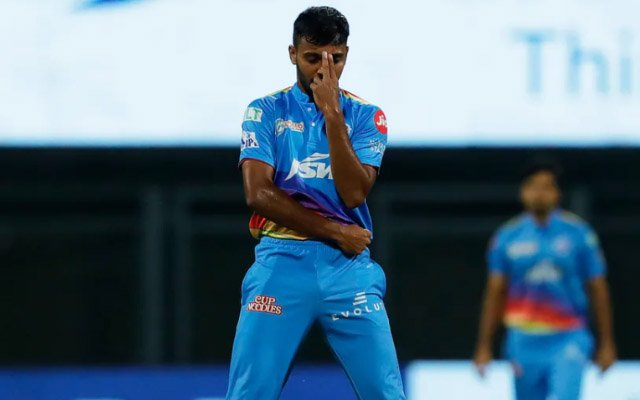 
Chetan Sakariya endured a difficult outing in the IPL 2022 season as despite being playing for a new franchise in Delhi Capitals (DC), he failed to get a consistent run in the tournament, featuring in only three matches, which eventually took him into depression. However, in his appearances, he impressed with the way he celebrated his wickets, including the unique Dragon ball Z gesture.

The left-arm pacer was bought by DC in the IPL 2022 mega auction for INR 4.2 crores, but he managed to play only 3 matches as the franchise employed the services of Shardul Thakur, Khaleel Ahmed, Anrich Nortje and Mustafizur Rahman in the fast bowling department.

This didn’t sit well with Sakariya, who admitted that his confidence level went down as he was benched continuously and even led to him going into his shell for 10-12 days during the IPL 2022.

I Teleported Myself To My Father And Told Him That Look I Have Got An International Player Out: Chetan Sakariya On His Dragon Ball Z Celebration

Chetan Sakariya might have played only three matches for Delhi Capitals in the IPL 2022, but he impressed all with his bowling, picking up three wickets at an economy rate of just 7.64. The Saurashtra pacer is known for his unique celebrations.

This time, he unleashed a new celebration from the series ‘Dragon Ball Z’ when he dismissed Aaron Finch in IPL 2022 in a match against Kolkata Knight Riders.

While speaking in an exclusive chat with Sportskeeda, Chetan Sakariya revealed how his celebration after picking up the wicket of the Kolkata Knight Riders (KKR) opener was dedicated to his late father.

“The day I played and dismissed Aaron Finch, I did that Dragon Ball Z celebration. Whenever the character did that, he used to get teleported to wherever he wanted. So I too teleported myself to my father and told him that look I have got an international player out. So that was really unique for me.

Since I wasn’t a part of the playing XI, I began to feel very lonely. I used to have sleepless nights, used to miss my father a lot. He used to tease me at times by saying that he would consider me a good bowler only if I dismiss an international player,” Sakariya said.

Sakariya will be hoping for more chances next season for DC and stake a claim for the Indian team once more.

Also Read: IND VS SA: It Is Brilliant In Terms of Watching Umran Malik In The Nets: Rahul Dravid