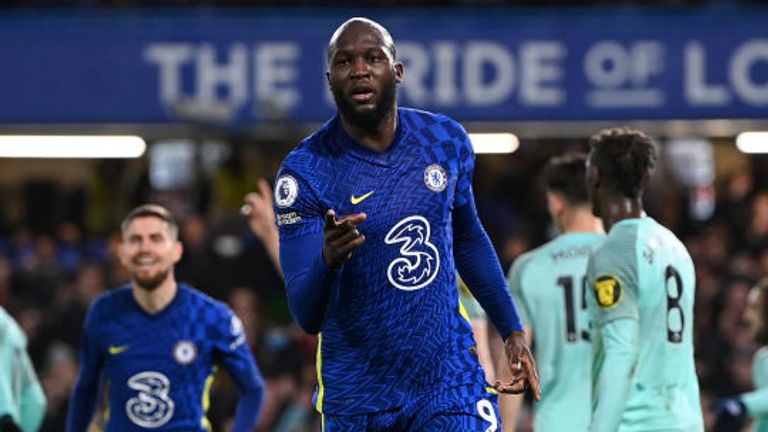 
Brighton inflicted a major blow on Chelsea’s Premier League title hopes as substitute Danny Welbeck’s stoppage-time header secured a 1-1 draw for the Seagulls in a pulsating encounter at Stamford Bridge.

Chelsea were on the brink of victory having survived a barrage of Brighton pressure following Romelu Lukaku’s first-half opener (26), but Welbeck’s dramatic leveller, nodded in from Marc Cucurella’s cross (90+1), left them stunned and secured a deserved point for Graham Potter’s side.

The result is a major setback for Chelsea, who were below their best and now risk losing further ground on leaders Manchester City having only won one of their last four Premier League games.

It appeared they had weathered the storm after N’Golo Kante’s introduction from the bench midway through the second half helped to tilt the momentum in their favour following a lengthy period of Brighton dominance during which they created a series of chances.

But Thomas Tuchel’s side, who also lost Reece James and Andreas Christensen to injury, missed several opportunities to extend their lead in the closing stages before Welbeck’s towering header prompted wild Brighton celebrations, handing a major boost to Manchester City in the process.

Man of the match: Yves Bissouma

Chelsea were boosted by Lukaku’s return to the starting line-up for the first time in the Premier League since October but, with Marcos Alonso benched and Ben Chilwell out for the season, there was also the more unfamiliar sight of Reece James lining up at left wing-back, with Christian Pulisic filling in on the right.

The 22-year-old duly endured some uncomfortable moments up against his former Chelsea team-mate Tariq Lamptey, who had an early penalty appeal turned down, then cut inside James and fired a left-footed shot a few yards wide.

Those moments served as early warnings for Chelsea, but the first big opportunity fell their way when Brighton goalkeeper Robert Sanchez flapped at a corner and Cesar Azpilicueta steered the loose ball onto the post via a deflection.

Antonio Rudiger headed straight at Sanchez moments later and Cucurella dragged a shot wide at the other end, but the game’s next major incident was James’s withdrawal, the wing-back immediately signalling to the bench and needing to be helped off the pitch following a challenge by Lamptey.

It was a considerable blow for Chelsea, especially given Chilwell’s long-term absence, but their frustration made way for elation moments later when Lukaku outmuscled Neal Maupay and headed Mason Mount’s corner beyond Sanchez to put them in front.

Maupay required treatment having been caught in the face as he jostled with the Chelsea striker and could be seen protesting to the fourth official as Brighton finally got the game back under way, but by that point, the VAR check had ruled in Chelsea’s favour.

Brighton, angry that the goal had been allowed to stand, responded strongly and soon began to dominate, unleashing a flurry of shots on the Chelsea goal which included Adam Lallana forcing a fine save from Edouard Mendy and Lamptey looping an effort just over.

The visitors were angered again when Antonio Rudiger flew into a tackle on Lamptey, winning the ball but with both feet off the ground. He was shown a yellow card but the visiting players felt it should have been red.

Brighton, though, picked up where they left off after the break, with Alexis Mac Allister, Jakub Moder and the excellent Yves Bissouma all going close before they created their best chance, which saw Maupay’s goalbound effort heroically blocked by Rudiger with Mendy out of position.

Chelsea continued to look rattled but Kante’s introduction, three days after he was feared to have suffered an injury setback in the 3-1 win over Aston Villa, helped them contain the hosts.

For a period, the momentum was back with Chelsea. Rudiger’s header across goal was hacked away by Joel Veltman before it could reach the unmarked Lukaku and a last-ditch tackle from Cucurella then denied Mount a one-on-one opportunity.

Lukaku then had an even better chance when Kovacic found him in the Brighton box but he opted to cut the ball onto his left foot instead of shooting with his right and Veltman, excellent in the visitors’ back three, managed to make another important block.

Chelsea had a penalty appeal turned down after Christian Pulisic went to ground on the left-hand side of the box, but Brighton continued to threaten, and their persistence paid off when Cucurella’s teasing cross was brilliantly directed into the net by Welbeck and Mendy was finally beaten.

The draw sends Chelsea above Liverpool into second place, but the gap to Manchester City looks ominously large.