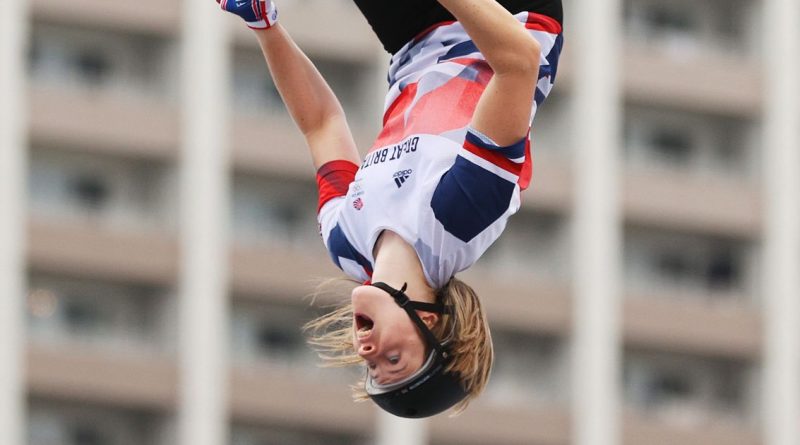 
‘It’s been gold medal or nothing this whole journey. I’ve learned competing that if you gamble and give yourself that chance, it will pay off better than if you hold back and wonder what could have been’

Worthington executes her 360 back flip, a first in women’s BMX freestyle (

Her motto is go big or go home and on the biggest stage of all it paid off for Charlotte Worthington.

Britain’s BMX freestyle star had crashed and hurt her arm attempting to become the first woman ever to land a 360 backflip in competition.

But rather than cut her losses and play it safe on her second run, the 25-year-old chose to go for broke.

To gasps from rival riders at the Ariake Urban Sport Park, Worthington nailed the trick to win Britain’s eighth gold medal at her first Olympics.

“It’s been gold medal or nothing this whole journey, go big or go home,” said the Manchester star.

“I’ve learned competing that if you gamble and give yourself that chance, it will pay off better than if you hold back and wonder what could have been.”

US ace Hannah Roberts was expected to win but Worthington, once a chef in a Mexican restaurant, proved too hot to handle, edging her out by 1.4 points.

Her triumph continued a sensational debut in the sport for Britain, who took gold and silver, through Beth Shriever and Kye Whyte, in BMX racing on Friday.

When Declan Brooks followed up yesterday by winning bronze in the men’s freestyle it meant Team GB had medalled in every category.

Factor in Tom Pidcock’s gold in the mountain biking and it’s been an incredible Games for the lesser known cyclists from the Manchester medal factory.

Brooks, 25, had to conquer his own demons by landing a double back flip for the first time since knocking himself out attempting it at the World Championships. He nailed it.

“I was unconscious for a while, hurt my shoulder and had 10 days off because of the protocols,” he recalled. “So when I landed this perfectly it felt great.”

Brooks admitted he was inspired by Worthington and why would he not be given the show she put on.

Worthington: ‘Our mantra has been to breathe. I know I can do these tricks but mentally you need your head to be calm enough to land them’
(

She said: “When I fell my arm was a little sore but there was so much adrenaline, all I was thinking about was the next run.

“Our mantra has been to breathe. I know I can do these tricks but mentally you need your head to be calm enough to land them.

“There was no way I wasn’t going to try it but I wanted to give myself the best chance of landing it.”

Worthington: ‘It was definitely a gamble. It’s amazing when gambles pay off’
(

On her first attempt she said she felt “giddy” and rushed it. But rather than panic she chose not to watch any of her rivals and instead chilled. When it was time for her to go again she was ready.

Roberts and the rest simply didn’t see it coming, Worthington having worked on it secretly, playing her cards close to her chest.

“It’s a women’s first and it was definitely a gamble,” she said. “it’s amazing when gambles pay off.”