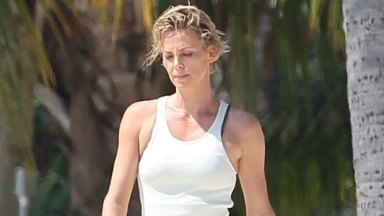 
Charlize Theron, 47, looked incredible during her latest outing. The actress stepped out in a white one-piece bathing suit as she visited a beach in Italy with her daughters Jackson, 10, and August, 7, on Friday. She walked around the Porto Ercole beach area as she wore sunglasses and laid out on a lounge chair to tan.

The beauty and her girls have been staying at Hotel Il Pellicano as she continues to film the sequel to Netflix’s The Old Guard. At one point, Charlize also took a dip in the water to keep cool, and looked as relaxed as could be. Jackson and August also spent time swimming and looked excited as one of them held onto her to stay afloat.

This isn’t the first time we’ve seen Charlize out and about with her daughters. Although the talented star tends to keep a lot of her personal life private, she sometimes enjoys public outings with the girls and shows off photos on social media. Earlier this year, they were seen enjoying a shopping trip together and they’ve also been seen attending a restaurant.

In addition to spending quality time with Charlize, Jackson and August, who the Mad Max star adopted in 2012 and 2015, respectively, love watching her in some of her roles in films and even thought she was “cool” for having a part as Morticia in the 2021 film, The Addams Family 2. “I can tell they are quietly pretty chuffed their mum is Morticia,” Charlize told The Mirror last year. “As a mum who, like all mothers, wants their kids to think she’s cool, it’s a feeling no Oscar can replace.”

Charlize also voiced the role of Morticia in the first Addams Family movie of the remake series and talked further about the project. “I love the relationship between them, their values,” she said. “We need to find kindness and understanding for others who might not look or talk like us. To be a part of something like this and know families will see it really resonates with me.”