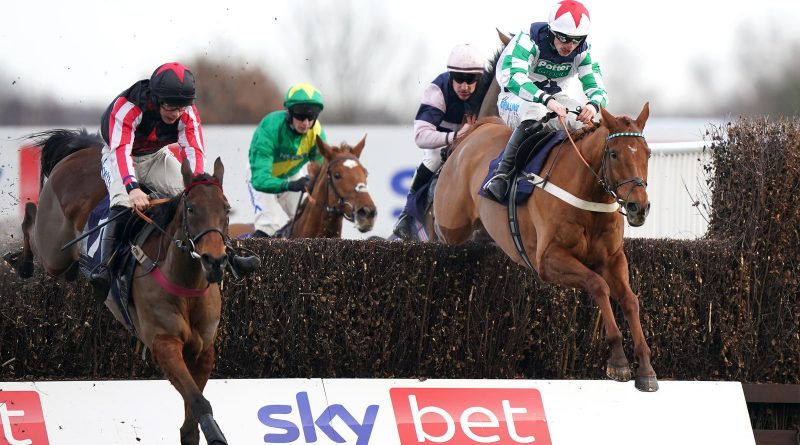 Funambule Sivola (5/4) and Deutsch made no mistake in the feature Sky Bet Extra Places Every Day Handicap Chase for the in-form Venetia Williams team.

After surviving a first-fence error, the seven-year-old travelled wide and hit the front over the second last, holding off the late charge of Before Midnight and The Big Bite in the final 100 yards.

Deutsch was delighted with his mount’s display after the victory and dedicated the win to a close friend who passed away on Thursday.

“He’s like a cat – he got away with it. He’s so tough and quick and he jumped the rest of the race beautifully,” he said.

“I’d like to dedicate these two winners to a very good friend of mine who sadly passed away last night.

“He just loved racing and he’s been with me since I was born until now. It was a shock for all of us and the family but I had to come racing today and he would’ve loved it – I wish I could’ve brought him here.”

Slevin looks to have matters in control over the final hurdle before a power-packed Hughes narrowed the margin towards the line, with Six Feet Apart getting the verdict in a photo finish with Irish runners the first three home.

Skytastic made an impressive hurdling debut for the Sam Thomas team, staying on powerfully to land the Rob Burrow Helping To Fight MND EBF ‘National Hunt’ Maiden Hurdle under Deutsch. Rob Burrow and his father Geoff have been enjoying a day at Doncaster racecourse on Friday, where Sky Bet have pledged a significant donation to motor neurone disease charities

The six-year-old was always in control of matters, pulling clear of his market rival Godrevy Point to win by just under four lengths.

Burrow was in attendance at Town Moor, despite his horse Burrow Seven not in attendance due to the going on the day. Sky Bet pledged a significant donation to motor neurone disease charities.

Travelling strongly throughout off the front, the seven-year-old made no mistake after running out at the first fence when odds-on favourite last time out at Hereford.