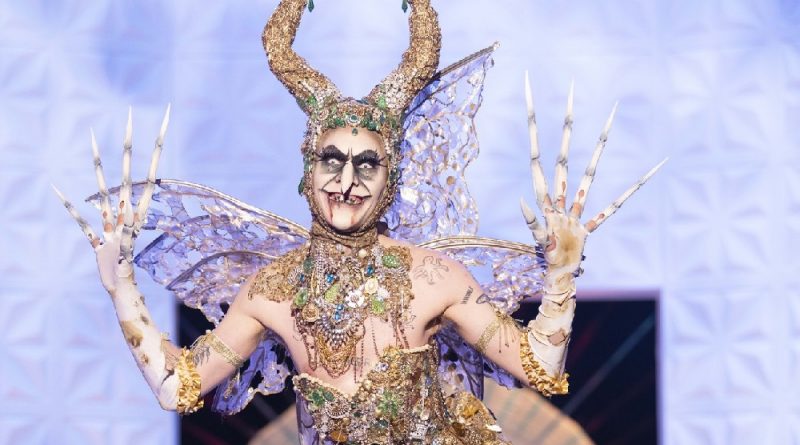 This week on Drag Race UK, the gloves came off.

The queens were tasked with creating a “hilarious” TV ad and, to put it lightly, RuPaul was less than impressed with the results. After Ru asked the queens to say who they think should be eliminated, the tensions that had been bubbling beneath the surface erupted in the workroom.

Bizarrely, the lip-sync turned out to be a rerun of last week’s showdown, with Charity Kase and Scarlett Harlet battling it out for a place in the next week of the competition.

Sadly, it was Charity Kase who was sent home. During her time in the competition, Charity served some of the most unique looks we’ve ever seen on Drag Race UK and brought a new kind of drag to the fore. PinkNews caught up with the trailblazer herself to find out how she’s doing now…

PinkNews: Hi Charity! Watching the episode back, how do you feel about your elimination now?

Charity Kase: I think I had so much more to give, but I was also ready to leave at that point. I feel like it was my time to go, because I hadn’t been feeling very confident. In the last few episodes, I’d kind of been down on myself and I’d been beating myself up a bit. So, yeah, I was honestly relieved to be out.

Victoria Scone told us that your runways were the most “overlooked” out of all the series three queens. Why do you think that was?

I don’t think the rest of the cast thought my looks were bad, they were all very complimentary of every single one of my looks. Much more than the judges! I went into the show with the best looks I’ve ever made and I was really proud of them. I was really expecting to come out on top for the sewing challenge or one of the “look” challenges, and obviously I didn’t. That’s just the way the cookie crumbles and obviously it’s all down to the judges and their opinions. Me and the judges clearly have different taste levels!

Why do you think so many of the queens told RuPaul they thought you should go home next?

I’d been beating myself up over the last couple of days and I had lost my drive. When Scarlett [Harlet] and I lip-synced the previous week, I was saying to her: “I’m actually not too bothered how this turns out.” And she was like, “well if you’re not bothered, then don’t do it! I want to be in this.” So that just showed me my mindset compared to everyone else’s at that point.

Who did you initially want to win the competition, if you didn’t win?

The person who deserved to win would be Victoria [Scone]. I think she’s the best drag queen of the bunch. She’s just so entertaining and so talented, so hilarious and brilliant.

And who do you want to win now?

Out of the people that are left in the competition, I would say Kitty [Scott-Claus] because I got super close with her and she’s a bundle of joy to be around.

You spoke about your HIV diagnosis on the show. What was the feedback like? Are you going to continue speaking out?

I went into the show knowing I was going to be open about my HIV status, because I’ve been open about my status publicly for quite some time. I will definitely use my platform to keep speaking out, not just about HIV, but other topics around the world. I see myself as an activist and I like to use my voice and platform to speak up for what’s right.

Bimini Bon Boulash shared some iconic throwback pictures of you both from years ago. How do you know each other and which other Drag Race UK alumni are you friends with?

I’ve known Bimini for years and years! Since I was 17 or 18 years old. I get on really well with Crystal from season one, I think she’s brilliant. I love The Vivienne and Blu Hydrangea. I’ve known Scarlett [Harlet] since we were 18 and we went on an episode of Big Brother’s Bit on the Side together in drag!

I love Charity Kase and their talent, creativity and art knows no bounds! From East LDN to RuPaul’s Drag Race. Here’s some throwback photos of Charity and I (before Bim and Charity existed I think!) at East Bloc and The Shelter in 2014. HOT MESS BABY! pic.twitter.com/xMbSkJ8Pfl

RuPaul gave all the queens some harsh feedback this week. But on social media, some fans said it was the challenge that was tired and unoriginal. Who did you side with?

I have a few times on my face. I have a pair of heels on my cheeks: one is a go-go boot, the other is a stiletto. Above them it says “queer” and “queen”. I just wanted to get queer and queen on my jaw and I really liked the symmetry of the words and how similar they are. And I really relate to the word “queer” myself and I wanted it to be a statement piece, to show the world but I know myself. Then on my forehead I have a little fly and on my cheek I have a little flower.

Was it weird filming one of your favourite TV shows?

The strangest thing was seeing the set and seeing behind-the-scenes. And also, the timing of everything! I’m not going to tell you how it’s done, obviously, but seeing how everything is filmed and how it all fits together was really interesting. It was fascinating to see what goes into it.

Every queer person has a different family situation, what is your relationship with your family like?

My family has always been super, super supportive of what I do. Growing up it was hard and my dad and I didn’t always see eye to eye, but we’ve both matured so much and now we have a brilliant relationship, just like I have with my mum and my sisters. I’m really grateful for their support and they’re all very proud of me. I love them all, even though they’re bloody annoying!

What’s next for Charity Kase?

Well, what’s not next for me is the question! But I’m going to focus a lot more on making garments and new collections. I run a shop where I sell hand-painted garments and custom clothing. So, I’ll be focusing quite a lot more on that over the next couple of months. There’s also a new night that I’m going to be starting, so keep your eyes on my social media to find out more!

What would you say to anyone who’s inspired to do drag after seeing you on the show?

Do it for yourself and for nobody else! And whatever you do, don’t compare yourself to any of the dickheads you see on Instagram, because you deserve more than that.