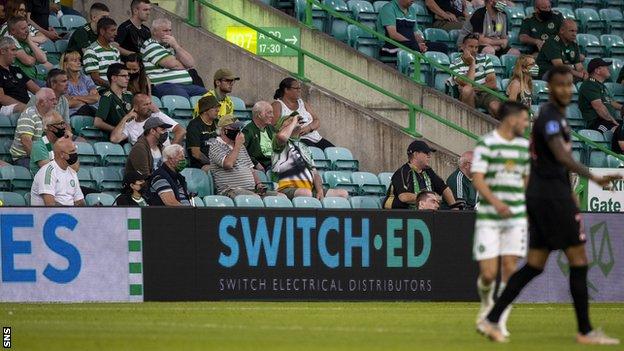 
Celtic and Rangers could have capacity crowds for next week’s European games.

From Monday, clubs need local authority permission for more than 5,000 spectators and Glasgow City Council are unlikely to reject such an application.

Rangers, trailing 2-1 from the first leg, host Malmo at Ibrox in next Tuesday’s Champions League third qualifying round return leg.

Celtic take on Czechs Jablonec in the Europa League on Thursday with the return in Glasgow on 12 August.

The Scottish government announced on Tuesday a further easing of restrictions from 9 August, including increasing permitted stadium capacity to 5,000.

Under previous guidelines, both Celtic and Rangers were granted numbers above 10,000 and 20,000 for recent home matches.

Hibernian are playing at home for the first leg of their Europa Conference League third qualifying round match with Rijeka on Thursday and have been granted a 5,600 crowd at Easter Road. They visit Croatia next Thursday.

Aberdeen (Europa Conference League) and St Johnstone (Europa League) are away from home on Thursday against Breidablik and Galatasaray, respectively, with the return games at Pittodrie and McDiarmid Park on 12 August.