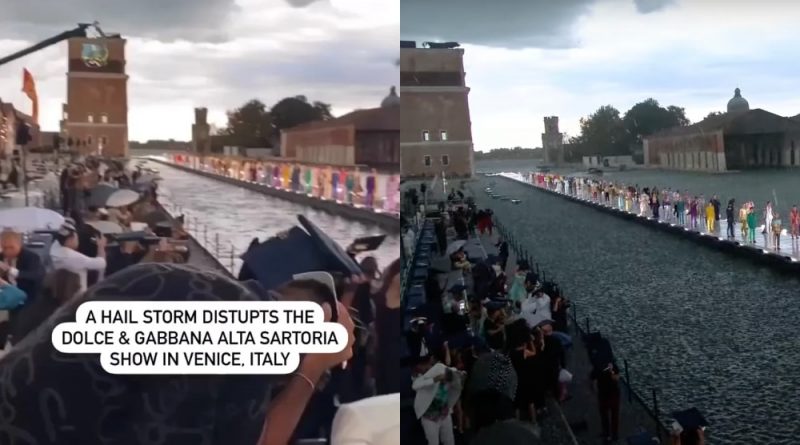 In scenes from the Old Testament, a Dolce & Gabbana show ended in mayhem after a hailstorm swept through the Venice, Italy, runway.

The likes of Helen Mirren, Jennifer Lopez, Heidi Klum, Kourtney Kardashian and Travis Scott were left scrambling as they ducked for cover under glossy magazines, suit jackets and umbrellas at the apocalyptic Alta Sartoria for D&G show.

The models for the 110-look show, meanwhile, kept their cool as the chaos unfolded above them, with drenched and battered attendees shouting “s**t” and “ow” as they fled, according to video footage posted to Instagram.

Even the brand’s co-founders, Domenico Dolce and Stefano Gabbana, could be seen covering their heads as they strolled down the runway.

The bad weather forecast was expected, with the show’s organisers pushing it forward by an hour to 8pm in an effort to keep heads dry, Vogue reported. Mother Nature, alas, had other ideas.

Vogue claimed that Mirren could be heard muttering: “They’ll have to pay for all this,” while Vin Diesel shouted: “Only in Venice!” as he fled via boat from the Arsenale runway.

But some viewing the Sunday (29 August) livestream may have seen the hailstorm as a biblical payback for the controversial comments made by D&G’s co-founders, who once openly opposed gay adoption, have sold “slave sandals” and claimed sexual harassment is “not violence“.

The venerable fashion duo ignited a firestorm of criticism in 2015 when they took aim at same-sex families, despite them literally being gay themselves.

Describing “non-traditional families”, Dolce told Italian magazine Panorama: “We oppose gay adoptions. The only family is the traditional one.

“No chemical offsprings and rented uterus: life has a natural flow, there are things that should not be changed.”

“You are born to a mother and a father,” he added, “or at least that’s how it should be.

“I call children of chemistry, synthetic children. Uteri [for] rent, semen chosen from a catalogue.”

Six months after making the tinderbox remarks, the designer later apologised to Vogue. “I am so sorry. It was not my intention to offend anyone.

“I’ve talked to Stefano a lot about this. I’ve realised that my words were inappropriate, and I apologise. They are just kids. You don’t need labels, baby labels.”