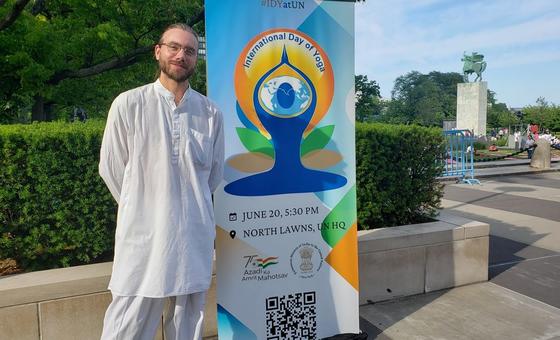 
Returning to an in-person format this year, the verdant North Lawn was transformed into a sprawling exercise area for the yoga demonstration session, where experienced yogis and curious newcomers alike, flexed their bodies – and minds.

Yoga is an ancient physical, mental and spiritual practice that originated in India and is now practiced in various forms around the world.

The word ‘yoga’ derives from Sanskrit and means to join or to unite, symbolizing the union of body and consciousness.

Inaugurating the event, the President of the UN General Assembly, Abdulla Shahid, noted that as the COVID-19 pandemic has upended lives and livelihoods, triggering a deluge of anxiety and depression, “the practice of yoga serves as a holistic approach to the physical, mental and spiritual health and well-being of humanity.”

India’s Permanent Representative to the United Nations, Ambassador T.S. Tirumurti said that during the difficult times of the pandemic, millions embraced yoga as their companion, to stay healthy, overcome depression and mental anxiety and it is in recognition of this important role of yoga that the theme for this year’s celebration is ‘Yoga for Humanity’.

“Yoga can also be an integral part of our build back better strategy”, he said.

Organized by the Permanent Mission of India to the United Nations, this was a first in-person yoga day celebration after a hiatus of two years due to pandemic induced restrictions.

The event titled “Yoga with the Masters” featured introduction to basic yoga practices and their demonstration by renowned Yoga experts, a yoga dance by the group Indian Raga, pranayama breathing by Isha Yoga, yoga asanas by Bhakti Center, and a meditation workshop by the Integral Yoga Institute.

Highlighting the benefits, Sam Chase, an Instructor at Isha Yoga said, “Yoga is about being in an experience in which you and the rest of the existence are not separate things. Now, if you do the yoga practices, definitely these benefits will come, you will become more mentally balanced, you will become physically healthy.”

“But it’s a little bit like driving an airplane around on the streets. Yes, you can use it as a bus if you want, but yoga has the potential to take you into the sky.”

Practicing yoga since the age of 15, Kishore Chandra of Bhakti Center was thrilled to be back at the UN headquarters.

Speaking to UN News, he said, “I feel really good being back on the lawn, because in 2019 it was raining, and we did it inside the General Assembly, and so it’s been since 2018 that we’ve been out here… there’s nothing like being in person out here with everyone.”

“Yoga is really a way of life, it’s not just the asanas, the asanas are part of it, but for me it means a way of life, because asanas help you get something special, which is peace of mind.”

Recognizing the universal appeal of yoga, the United Nations proclaimed 21 June as the annual International Day of Yoga in 2014, with the adoption of General Assembly resolution 69/131.

The resolution underscored that global health is a long-term development objective that requires closer international cooperation through the exchange of best practices aimed at building better individual lifestyles devoid of excesses of all kinds.

It recognized that yoga provides a holistic approach to health and well-being.

In this regard, the World Health Organization has also urged its member states to help their citizens reduce physical inactivity, which is among the top ten leading causes of death worldwide, and a key risk factor for non-communicable diseases, such as cardiovascular diseases, cancer and diabetes.

The President of General Assembly reminded that yoga is all about unity: connecting the mind, body and spirit.

Improving global health is our long-term objective. Today’s celebration therefore is also an opportunity to promote more sustainable lifestyles and a healthier outlook on life.”

He highlighted the power of yoga as the power of unity for a healthier, happier and prosperous future for all

Role of the UN

Integral Yoga Institute’s Kali Morse, led a meditation workshop, stressing the important role the UN can play, in spreading awareness about the multifaceted benefits of yoga.

“The fact that it is at the UN, I think is monumental, because the UN has always been a place, where hopefully, we can bring people together to make decisions that are for humanity.”

She said it’s crucial to “have an international day of yoga, where you can connect people, and then have speakers that talk about how we can serve humanity, and act as human beings, throughout the world, to avoid more war and unrest.”

Healthy lives and wellbeing have also been recognized as an essential aspect of the 2030 Agenda for Sustainable Development.

A path for sustainable living

Practitioners believe that the essence of yoga is balance and therefore it can be an important instrument for promoting sustainable lifestyle in harmony with planet Earth.

Sam Chase of Isha Yoga pointed out how we have always gone on about trying to fix humanity by saying what is right, what is wrong, but yoga doesn’t approach it like that.

He emphasized that more than ever, especially given the variety of environmental crises going on in the world, we have to come together as people, and ensure that our planet doesn’t disappear on us.