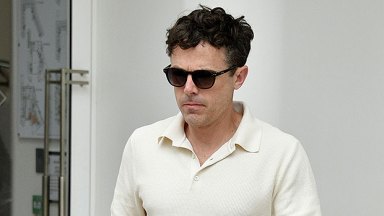 
It looks like it won’t exactly be a family affair at Ben Affleck and Jennifer Lopez’s wedding in Georgia this weekend. The Justice League star’s brother, Casey Affleck, was spotted grabbing some beverages at a Starbucks in Los Angeles on Saturday, August 20, the day the superstar couple are expected to exchange vows on Ben’s sprawling Riceboro estate, per video captured by TMZ.

In the clip, Casey is seen exiting the store and appears preoccupied with the coffee run as he is asked why he is missing out on his brother’s big day. Casey mumbles something in response, but his words are unclear and he continues to get into his car without answering any other inquiries.

Despite Casey and Ben having a close sibling bond in the past, and many fans expecting to see the Manchester By The Sea star in attendance at the Bennifer 2.0 nuptials, the brothers have not been photographed together as of late. HollywoodLife will keep you posted on any further updates regarding their relationship.

While Casey may not be witnessing the celebrity wedding of the year, his and Ben’s mom, Chris Anne Boldt, was one of the first guests to arrive. Ben was by her side when when she was rushed to the hospital and received stitches on Friday after she fell off a dock on the property and injured her leg. Chris was taken to the Liberty County Medical Center to treat her injuries around 12:30 p.m., according to the Daily Mail. A source close to the couple told the publication that Chris’ injuries are “not serious.”

Meanwhile, this will be the second wedding for Ben and Jennifer. Before the big Georgia wedding bash, the superstar couple made it official by registering for a marriage license in Clark County, NV on Saturday, July 16. According to the license filing obtained by Hollywoodlife (below), Jennifer is taking Ben’s last name, as she is listed as “Jennifer Affleck.” At the time, the “Waiting For Tonight” hitmaker dished on all the details on her On the JLo newsletter, adding, “We did it. Love is beautiful. Love is kind. And it turns out love is patient. Twenty years patient.”

Jennifer and Ben have a love story for the ages. The iconic pair’s romance started while they were both working on the movie Gigli in 2002. Shortly afterwards, they went public with their relationship. “We met at a couple of parties. We barely paid any attention to each other,” Jennifer said during a 2003 Dateline interview for the movie. “We became friends first.”

Ben Affleck’s Parents: Everything To Know About His Mom & Dad

The couple’s love affair was soon the talk of the town, earning the superstars the first one-name moniker for a celebrity couple: “Bennifer.” In November of 2002, Ben popped the question with a pink ring, worth a reported $2.5 million. As the anticipation for their wedding grew, the couple surprisingly called it off. “Due to the excessive media attention surrounding our wedding, we have decided to postpone the date,” the pair told People in a joint statement. By January 2004, J.Lo and Ben were officially exes.

Nearly two decades after ending their engagement, the former couple were back together and being called “Bennifer 2.0.” The pair went Instagram official in July 2021, when Jennifer shared a snap of them packing on the PDA during her 52nd birthday celebrations. After a year of dating, they decided to give an engagement another try in April 2022, as Ben got down on one knee with a green diamond ring, worth an estimated $5 million!