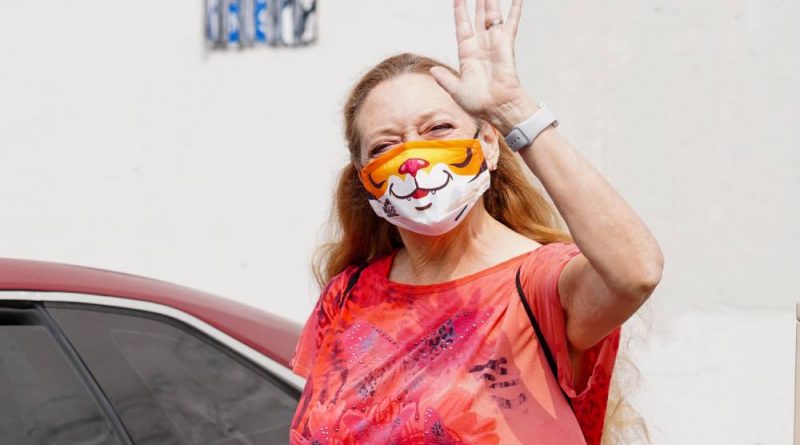 Carole Baskin is suing Netflix over footage of her used in Tiger King 2, and claimed the depiction of her in the first hit series was “harsh and unfair”.

The original Tiger King docuseries followed Joe Exotic, a “gun-toting gay redneck” and former owner of a private Oklahoma zoo where he bred a large collection of tigers, lions and other big cats.

Exotic is currently serving a 17-year prison sentence for a host of animal abuses and plotting to murder animal rights activist and arch nemesis Baskin.

The series’ five-episode sequel, Tiger King 2, is set to premier on 17 November, but Baskin has filed a lawsuit which says she was “shocked” to see that the trailer “prominently portrayed” her as a “central” figure.

According to court documents, filed on Monday (1 November) and obtained by Variety, Baskin and her husband Howard are suing Netflix and production company Royal Goode Productions, claiming they have no right to use footage of her.

The document states that the couple understood “use of the footage of the Baskins and Big Cat Rescue” would be limited “to the single, initial documentary motion picture”, and that “the Baskins believed that any sequel – though odious – would not include any of their footage”.

Carole and Howard Baskin are calling for the sequel’s release to be halted, and for all footage of them removed from Tiger King 2.

Baskin previously told PinkNews that the first series had portrayed her sanctuary “as this God awful place that abused animals”, and that its release “made people call me up and say they were going to burn the place to the ground, they were going to turn the cats loose”.

The court documents reiterate that Tiger King was “particularly harsh and unfair in its depiction of the Baskins and Big Cat Rescue”, and adds: “Perhaps most pernicious is the overarching implication in [Tiger King] that Carole Baskin was involved in the disappearance of her first husband in 1997.”

Last year, in an exclusive interview with PinkNews, Carole Baskin revealed that she is bisexual.

She explained that she was engaged to a psychologist who worked with LGBT+ people during the AIDS crisis, and she “became very close to people in [the LGBT+] community”.

Baskin said: “But it was during the 80s that I discovered that through dealing with the LGBT+ community that I [realised] I had just as equal feelings for women as I did for men.”

“I have always considered myself to be bisexual,” she added. “Even though I’ve never had a wife, I could just as easily have a wife as a husband.”